Deacon Willis and the Meetinghouse by the Brook 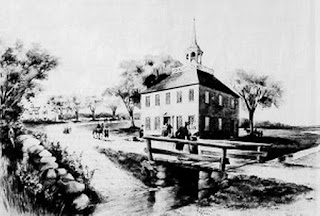 The second Meetinghouse"
"There's a little valley you reach going westward as High street curves and dips beyond Winthrop square. Just before it goes up Marm Simonds' hill the road passes over a brook -- the brook of all the brooks of Medford. Did you ever stand here on a June morning and look across the meadow to the north and watch this brook come sparkling from out the distant foliage like a silver line through billowy grasses and nodding daisy blossoms? And turning to look southward follow its course through the marshes and to the river; then you notice on a near-by tree a tablet that marks the site of the second meetinghouse. You may have passed this spot many times in the modern electric car, but only by the ‘old-fashioned’ way of walking and loitering along here will a picture of the early years of Medford's history present itself. You will even need to get acquainted with the brook itself - see it in its varied moods, inquire into its mysteries, follow it as though you walked with a friend, and then it will tell you that the old meetinghouse and this brook were companions for many years; that no one is now living of all who loved the sacred spot; that the name lives forever in ‘Meetinghouse brook.'

But what of the brook? Whence does it come? Two miles or so to the north from out what was once known as Turkey Swamp, but now the Winchester Reservoir, it finds its way southerly down the woodlands past old gray rocks that throw dark shadows in its pools; sometimes it gurgles over the stones and then is silent among clumps of brake and fern and masses of jewel-weed. The Canada lilies swing their bells along its course. It winds down a narrow dell where its waters once, held at flood, turned the wheel of Captain Marble's mill (formerly it was called Marble brook). A high bank and heap of stones mark the spot, and there the fringed orchid waves its plume. It flows under bridges shaded by willows, through beds of mint; and the monkey-flower in midsummer and the flaming cardinal flower in August love the cool water. Then it swings around and passes southeasterly under a stone wall out into the orchard of General Lawrence's farm. Here it forms three levels, being dammed with large blocks of granite, making a miniature sea - a delight to the children - for here they wade and sail their boats. Now it quickens pace and passes under a small stone bridge at Winthrop street, where the white flowers of the turtle-head guard the archway; swings around past the place where John Albree once held its waters back to run his gristmill, and like an arrow crosses the meadow, flows under the roadway near site of the second meetinghouse, and wends its way to the river."

Thomas Willis, who wrote his last name as Willows, was a housewright (builder of homes) and a selectman (councilman), but he is most remembered as one of the founders of the church of Medford, which was constituted Feb. 11, 1713. He was also the first deacon of the church. The first meetinghouse accommodated the people for twenty years, when in June of 1716, it was considered inadequate to meet the needs of the increasing population. Seven prominent citizens headed by Deacon Willis were chosen to ascertain ‘whether it was best to build a new meetinghouse or to enlarge the old.’ The committee reported that a new meetinghouse should be built, to be 50 feet long, 38 feet broad and 27 feet stud, and to cost 450 pounds. Nearly three years elapsed before action was taken on this committee's report and it was voted down. Other attempts to build a second meeting house also failed to obtain the blessings of the townsfolk, and it wasn't until January of 1726 that the town agreed to purchase one acre adjoining Marble brook for 55 pounds to build a new meetinghouse on. It was decided that it would be proper to build the meetinghouse 52 feet large, 38 feet wide, 33 feet posts.

By 1770, a third meetinghouse had been built some distance away to the east on the northerly side of the same road, larger and better suited to the needs of that day, and when Paul Revere rode through Medford some five years later, he passed by the third meetinghouse, tall and imposing in the moonlight, and pressing westward along High street, crossed the wooden bridge over Meetinghouse brook. The hurrying hoofs awoke no echoes from the old meetinghouse, for long ago it had been removed.

Thomas Willis served as deacon for seven years, resigning on March 9, 1720 on account of his age. He died in 1725 and is buried in plot 148 at Salem Street Burying Ground in Medford, Massachusetts. The inscription on his tombstone reads:

Deacon Thomas Willis was my 11th great-grandfather. One of his granddaughters, Susanna Clements, migrated from Massachusetts to Virginia, where my ancestors from this line remained until four generations later, when Joshua Wright migrated to Fentress County, Tennessee. His grandson, Caleb Means, was my great-great-grandfather.