Margaret of Naples, Countess of Anjou and Maine 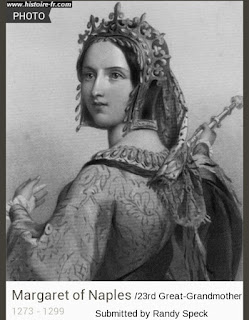 Margaret of Naples, Countess of Anjou and Maine, was born into the Capetian House of Anjou, at Napoli, in the Province of Naples, Italy in 1273. Her parents were Charles II, "the Lame King of Naples" and Queen Mary of Hungary. Margaret was the wife Charles of Valois, son of Philip III of France. Her father ceded her the County of Anjou as her dowry. Their children included: Isabelle, wife of John III, Duke of Brittany and Philip VI of France. Margaret's nephew was Charles I of Hungary and her grandfather was Stephen V of Hungary. Margaret died on December 31, 1299 and is buried at St Jacques, Paris. Margaret of Naples was my 23rd great grandmother.
at August 02, 2015