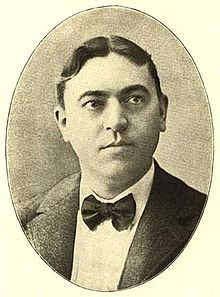 Baritone Arthur Collins, the leading mintrel-style dialect comedy singer of the early 1900’s was born on February 7, 1864 in Philadelphia, Pennsylvania. His solo hits, led by the famous ‘Preacher and the Bear’ were plentiful with over 40 top ten hits, however he achieved his greatest success in his partnership with tenor Byron Harlan. He was also a member of the Peerless Quartet from 1909 until 1918. In the December 1942 issue of Hobbies magazine, Journalist Jim Walsh attributed Collins’ popularity to these qualities: "There probably has never been a sweeter, more naturally musical baritone voice than his....Then, too, Arthur Collins managed invariably to get into the wax the impression of a warm, lovable personality. The unctuous sound of his chuckles in dialect work is unfailingly charming." His solo hits include the #1 recordings of ‘Kiss Me, Honey, Do’ (1899), ‘When You Ain’t Got No More Money, Well, You Needn’t Come Around’ (1899), ‘I Guess I’ll Have to Telegraph My Baby’ (1899), ‘Hello Ma Baby’ (1899), ‘I’d Leave My Happy Home For You’ (1899), ‘Mandy Lee’ (1900), ‘Ma Tiger Lily’ (1900), ‘Bill Bailey, Won’t You Please Come Home’ (1902), ‘Under the Bamboo Tree’ (1902), ‘Good-Bye, Eliza Jane’ (1903), ‘Any Rags’ (1903) and ‘The Preacher and the Bear’ (1905).
With Harlan’the team nicknamed ‘the Half-ton duo’ because of both their portly stature… Collins collected #1 hits with ‘Down Where the Wurzburger Flows’ (1902), ‘Hurrah For Baffin’s Bay’ (1903), ‘Camp Meetin’ Time’ (1906), ‘The Right Church, But the Wrong Pew’ (1909), ‘Under the Yum Yum Tree’ (1911), ‘Put Your Arms Around Me, Honey’ (1911), ‘Alexander’s Ragtime Band’ (1911), ‘When the Midnight Choo Choo Leaves for Alabam’’ (1913), ‘I Love the Ladies’ (1914), ‘The Aba Dada Honeymoon’ (1914), ‘Oh How She Could Yacki Hacki Wicki Wachi Woo (That’s Love in Honolulu)’ (1916) and ‘Dark Town Strutters Hall’ (1918).
Collins and Harlan recorded the first song to refer to "jazz": "That Funny Jas Band from Dixieland," copyrighted on November 8, 1916, recorded on January 12, 1917, and issued on Victor 18235.
On October 20, 1921, Collins was seriously injured during an Edison Tone Test demonstration. Collins exited the stage in the dark so the audience could guess whether the singing heard came from the singer himself or an Edison Diamond Disc machine, and he fell through a trap-door accidentally left open.
After a recovery period, he made a solo recording for Gennett—"I Ain't Got Enough For To Pass Around" (4866), issued in June 1922—and more recordings with Harlan for Edison, but heart ailments coupled with lingering effects from the fall prompted him to retire to Florida in 1926.
Arthur Collins died on August 3, 1933.

To listen to recordings by Arthur Collins, or other early recording artists, visit the Cylinder Preservation and Digitization Project at the University of California at Santa Barbara.
at July 27, 2012