In the October 1904 edition of the Edison Phonograph Monthly, there was an announcement of a new recording that was being released.... 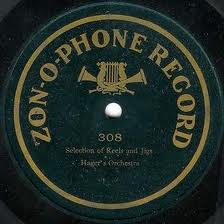 "Blue Bell" is something new in the way of a phonograph record. It is a bells and xylophone duet by Albert Benzler and Frederick W. Hager, with orchestra accompaniment. This is a most excellent Record of one of the most popular airs published in some time. The tune is carried by the bells, the xylophone plays a variation of the air and back of this is a fine orchestra accompaniment. We predict that this record will sell as well as the vocal record of the same selection, the demand for which has exhausted our capacity to manufacture it ever since it was listed.”

Multi-talented musician and composer Frederick W. Hager (xylophone) was a prominent figure in the early recording industry. He was a widely recorded bandleader for several record companies. His Hager's Band and Hager's Orchestra appeared on many dozens of Zonophone disk recordings. For a time, according to the October 1903 Edison Phonograph Monthly, he directed the Edison Concert Band. In this recording of Blue Bell, we get a rare hearing of Hager as a soloist.

To listen to recordings by Frederick W. Hager, or other early recording artists, visit the Cylinder Preservation and Digitization Project at the University of California at Santa Barbara.