Attention Band Leaders, Do Not Play My Song 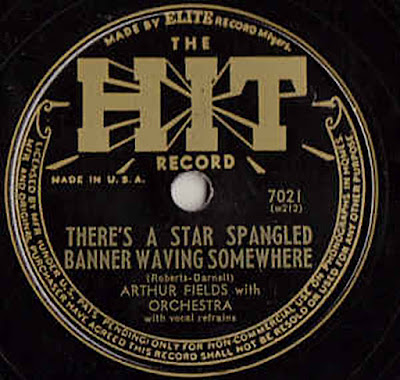 "There's A Star-Spangled Banner Waving Somewhere" is a patriotic anthem written in 1942 by Paul Roberts and Shelby Darnell (a pseudonym for producer Bob Miller). The song enjoyed great popularity during the World War II years. So why did Miller threaten to sue big-name band leaders if they played it?

It was because Miller was all about hillbilly music. When the song hit its third million in record and sheet music sales he placed an ad in Variety magazine, asking big-name band leaders not to play it, and when the song made the Hit Parade he threatened to sue if they did. He explained that his reputation as a writer and publisher was at stake. "This music," he insisted, "must have the common touch. It is violated unless done by a true son of the soil, one to the manner born."

The title of the song has a significant meaning. The word "somewhere" appears to signify heaven, for, as the lyrics state, only the great heroes of Uncle Sam get to go there. The narrator states he'll see the likes of Lincoln, Custer, Perry Washington and Hale. He adds that he is willing to die to "be a free American" and wherever that Star Spangled Banner is waving is where he wants to be living when his time to die is at hand.

My 1942 recording of this song by Arthur Fields (Hit Records) is among the first recordings after the song was written.