Three Cheers for the Red, White & Blue, But Not The Yankees 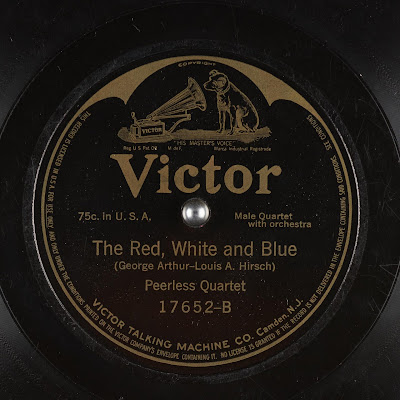 In 1974, a radio and tv commercial began airing that claimed there was nothing more American than "baseball, hot dogs, apple pie and Chevrolet." I'm not sure if fifty-four years earlier writer/composer Louis Hirsch would have agreed.

In 1914, Hirsch, who was born in New York City, was one of the nine founders of ASCAP, which stands for "American Society of Composers, Authors and Publishers," a non-profit performance-rights organization that protects its members' musical copyrights by monitoring public performances of their music and compensating them accordingly.

In that same year, 1914, Hirsch composed a patriotic love song entitled, "The Red, White and Blue," which was recorded and released on Victor Records by The Peerless Quartet. It is one of the disks in my 78rpm record collection.

Being a native of New York, Hirsch loved the Yankees, but in 1920 he sued the baseball organization for $100‚000 because of an incident which happened at a game on May 24th that year. To avoid sitting next to a cigar smoker‚ Hirsch switched seats with his brother, but an usher informed him it was against the rules to do that and ordered the two brothers to switch back. Hirsch refused and had to be forcibly ejected from the stands.

The Peerless Quartet, a popular ensemble organized in 1906, recorded The Red, White on June 4, 1914.


Your lips are so red
Such a beautiful red
I just love to see you smile
Your teeth are so white
Like the stars in the night
or the pearls from a southern isle
The blue of your eyes
Like the midsummer skies
Form a color I just love to view
So no wonder I say
When I'm looking your way
Three cheers for the
Red, White and Blue