Hige Boles Proved To Be An Excellent and Efficient Official, who had the Respect of all Law-Abiding Citizens 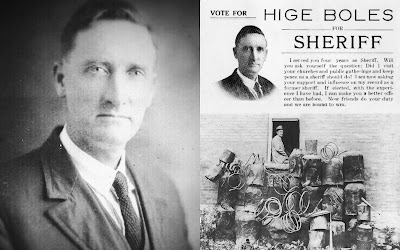 Sheriff A.H. Boles is a native of Fentress County Tennessee, but at the age of ten years his parents moved to Clinton County, where he has resided since that time. For a number of years he lived at Hobart, but about 12 years ago he moved to Albany where he now lives. Most of his life has been spent on a farm and he now owns a fine farm in the Albany graded school district. He is now forty four years of age and is married and has an excellent family. He is a member of the Methodist Church here, a Mason, a progressive citizen and a staunch Republican. In the August 1925 primary election, Mr. Boles received a plurality of 407 votes and was elected in the final election by a majority of 735 votes. Although he has been in office only a short while, he has proven himself to be an excellent and efficient official, who has the respect of all law abiding citizens.

The above article was reprinted in the Clinton County News in 1965 under the headline "A.H. Boles Sheriff in 1926." By that time, Hige was 83-years old and was very active in the real estate business. During a twenty year period between 1914 and 1933, Hige was either sheriff or deputy sheriff for sixteen of those years. He was sheriff from 1926 to 1929, and he served as deputy sheriff during Sheriff Charles P. Huff's term from 1914 to 1917, during Sheriff Billy Felkins' term from 1922 to 1925, and during his cousin Sheriff Willie Winningham's term from 1930 to 1933.

Ahijah "Hige" Boles was born at Bolestown in Fentress County, TN on March 19, 1882, one of ten children born to George and Deborah Smith Boles. He died on March 22, 1975 at Sparta, TN. He is buried at Cedar Hill Cemetery in Clinton County. Hige followed in the footsteps of his grandfather, John Boles, who was the first post-Civil War Sheriff of Overton County, TN from 1865 to 1867.