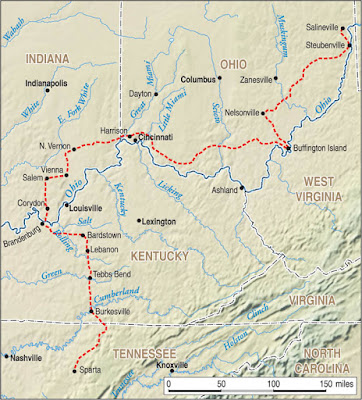 On July 2, 1863, Confederate General John Hunt Morgan and his troops crossed the Cumberland River at Burkesville, KY, where a skirmish with Union foes took place. Morgan's Rebels were able to drive the Yankees back to the nearby Marrowbone community, but another skirmish occured just beyond the community of Waterview. This time, however, the Union forces used artillery and fresh men to push Morgan back.

Morgan's whole purpose in conducting raids into the north was to create diversion to keep Union troops and resources away from the ongoing Confederate operations at Vicksburg and Gettysburg.

From Kentucky, Morgan's Men raided across southern Indiana and Ohio. At Buffington Island in Meigs County, Ohio on July 19, 1863, Union Maj. Gen. Ambrose Burnside ordered out all available troops for a battle that ended with the capture of over half of the 1,700-man Confederate force, including my grandmother Vada Boles' 3rd cousin, Samuel Washington Frost, who had grown up at Gap Creek in Wayne County and had enlisted in Co. H 7th KY Cavalry at the onset of the Civil War.

Samuel and hundreds of other prisoners who had fought at Buffington Island were sent to Camp Douglas prison camp in Chicago, where he died on March 26, 1864. It has been estimated that more than 6,000 Confederate prisoners died there from things like smallpox, dysentery, pneumonia, starvation and torture.

They are buried in the Confederate Mound at Oak Woods Cemetery, located in the Hyde Park neighborhood of Chicago. It is one of the largest mass graves in North America. Near the southwest corner of the cemetery stands a 30-foot granite monument dedicated to the thousands of Confederate soldiers who died at Camp Douglas.

As for General Morgan, less than a month after the skirmishes that had taken place in Cumberland County, he surrendered, although, he escaped to fight again, only to be killed about a year later.