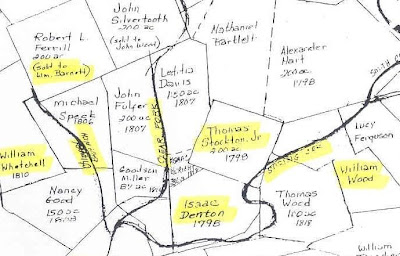 As soon as they were old enough, Jacob Jr., Michael and George Speck migrated west to an area that had just been opened to new settlers, near Wolf River and.....Stockton's Valey. It was just after the start of the 19th century. On August 23, 1812, at age 36, Jacob Jr. enlisted as a member of Captain William Cross' company, 7th Regiment of the Kentucky Militia, commanded by Colnel Joshua Barbee. The company traveled through NewPort, Kentucky to St. Mary's River, the international border seperating the United States froM Canada, where they encamped for some four months with General Harrison’s army. During the winter, they suffered greatly from the severe weather, lack of adequate tents and blankets. They were discharged on March 23, 1813. Jacob Jr. came back to Stockton's Valley, where he resumed his life as a farmer tending to his 200 acres on Spring Creek. The record book doesn't say that Jacob Jr. was a member of Clear Fork Baptist Church, but it says his wife, Nancy, was. Occasionally, the Church clerk, or his assistant, would forget to record the minutes. That is probably the case with Jacob Jr. because you will see in a minute that he apparently was a member.

Michael Speck, who was born on November 5th, my birthday, married his wife, Sally, just before moving to Stockton's Valley. In 1805, Michael and Sally owned 114 acres on the Churntop branch of Clear Fork Creek. They joined Clear Fork Baptist Church in July of 1803.

In 1838, there arose a major disagreement within the Church and the congregation was split. Several members were exluded for siding with James Crouch, Jr. over several charges he had made against the pastor, Isaac Denton. Jacob, his wife, Nancy, and Sally Speck were among those excluded from the Church. (Note: Michael Speck had apparently died prior to the incident because Church records does not mention his name in the ordeal.)

Jacob Jr. died about 1862 in Clinton County. His burial place is unknown. Many of the Speck families fanned the fertile land adjacent to Wolf River. In 1943, the dam was built in Celina, Tennessee and Dale Hollow Lake was created. It is possible that a family cemetary containing the remains of Jacob Jr. lies beneath the waters around Lillydale.

George Speck, my 5th great-grandfather, migrated from present-day Danbury, North Carolina to the Dry Hollow area near the west fork of Obed's River in Overton County, Tennessee. He died about 1847.

Here is the genealogy line:

Jacob Speck, Sr., who died during the Battle of Camden, South Carolina, is my 6th great-grandfather, and Marina, J.D. and Elijah Speck's 7th Great-grandfather.

Jacob Jr. and Michael Speck are my 5th great uncles.