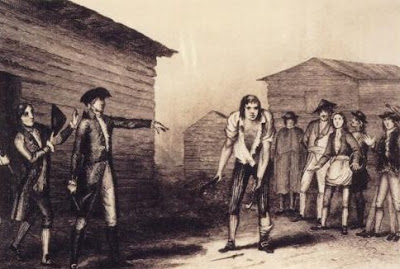 Joseph Crouch was a brother to James Crouch, one of the founding members of Clear Fork Baptist Church. While many in his family chose to migrate west, the Revolutionary War veteran chose to live nearly all of his life on Boone Creek in Washington County. He was born in 1749 and died September 8, 1830. Joseph was sheriff of Washington County from 1800 to 1806. While a sheriff, he often worked with then-Judge Andrew Jackson, who was upon the bench of the superior court from 1798 to 1804. It was while sitting at Jonesboro that he made the famous arrest of a criminal who had defied the sheriff and his posse. This occurred at the September term, 1802. Russell Bean, a resident of the town, doubting the paternity of a child born to him, cut off its ears, thereby causing its death. A warrant was issued for him, but Bean refused to be taken. Judge Jackson ordered Sheriff Crouch to summon a posse to aid him. He replied that he had summoned a certain number, but to no avail. Jackson then told him to summon the whole town if necessary, whereupon Sheriff Crouch summoned his Honor, Judge Andrew Jackson. The future national hero arose from the bench with the exclamation that, "By the eternal, he could take Bean single-handed." Procuring a pistol, Judge Jackson headed out the door for Russell Bean to demand his surrender. The judge found Bean and ordered him to either give up or be shot. Bean, terrified by the look and the determination of Andrew Jackson, surrendered without a fight.

Now, check this out: Joseph Crouch lived on Boone Creek, which was the first permanent settlement in Tennessee in 1769. He was a member of Buffalo Ridge Baptist Church. Another prominent member of that Church was Isaac Denton, Sr., who was the father of Clear Fork Baptist Church's first pastor. Both Joseph Crouch and Isaac Denton, Sr. were present representing their Church on the fourth Saturday in October of 1786 when the Holston Baptist Association was organized. There was another man at that meeting, who was there to represent North York Baptist Church of Holston. He was the church's pastor, John Frost, who....moved to Stockton's Valley in 1810 - one of the first Frost family members to settle there. He is my ancestor.