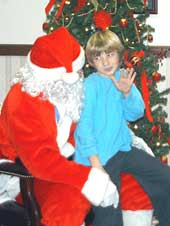 I just want to say THANK YOU to everyone who helped in our most successful food/toy drive ever!

This year, Christmas at home, reached almost 500 children and 256 homes locally. What a tremendous effort! Thanks to our co-sponsors - Clinton County News, the City of Albany, Clinton County Fiscal Court and Albany/Clinton County Chamber of Commerce.

Special thanks to the City and Fiscal Court water and road departments for deliveries, and to each individual who volunteered their time to make a delivery, for those who took time out to help with gift wrapping, and to those who donated food and toys to meet the needs of many during a year of economic hardships....I say THANK YOU! from the bottom of my heart!