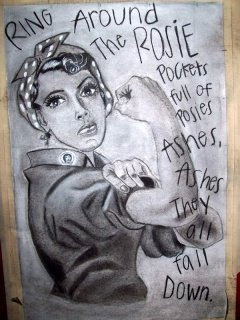 Rosie the Riveter is a cultural icon of the United States, representing the six million women who entered the workforce for the first time during World War II, many of whom worked in the manufacturing plants that produced munitions and material. These women took the places of the male workers who were absent fighting in the Pacific and European theaters. The character is now considered a feminist icon in the US, and a herald of women's economic power to come.

Rosie the Riveter was most closely associated with a real woman, Rose Will Monroe, who was born in 1920 in nearby Somerset, Kentucky, and moved to Michigan during World War II. She worked as a riveter at the Willow Run Aircraft Factory in Ypsilanti, building B-29 and B-24 bombers for the U.S. Army Air Forces. Monroe was asked to star in a promotional film about the war effort at home, and was featured in a poster campaign. Rosie went on to become perhaps the most widely recognized icon of that era. The films and posters she appeared in were used by the U.S. government to encourage women to go to work in support of the war effort.

Rose Will Monroe died May 31, 1997 at the age of 77. On October 14, 2000, the Rosie the Riveter/World War II Home Front National Historical Park was opened in Richmond, California, site of four Kaiser shipyards, where thousands of "Rosies" from around the country worked. A portion of Kentucky 1247 in Pulaski County has been renamed in her honor and an historical marker shows the location of her family home.

My daughter, Marina, age 15, did an outstanding job on her recently-completed charcoal drawing of Rosie the Riveter (shown above). I am so proud of Marina. She is not only beautiful and smart, but very talented, as you can easily tell. Way to go Marina! I love you!