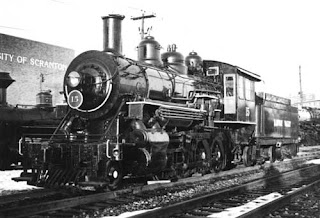 I remember when my friend, Steve Lawson, first showed me his dad's massive train collection. If you measured it like a map (one inch equals one mile), it stretched from New York to California. It was so big that it took up almost half of the full-size basement at his parents' home. Jim's facination with trains began as a child, when his father worked for a railroad company at Pineville. Jim rode the trains frequently and was always hanging out in the railyard.

In his basement, Jim had two four foot by eight foot layouts. They were connected by bridges. It had working railroad crossings, lighted buildings, trees, tunnels and about a million wires underneath that only he knew where they went. His pride and joy was his Louisville-Nashville train, which looked like the ones he saw as a child. 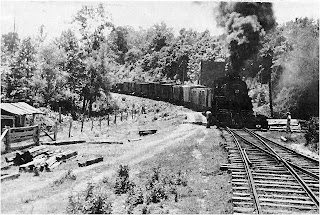 It was Steve who reminded me of the 'almost-local' Oneida & Western Railroad. What's that you ask? Well, in the early 1900's, a railroad was supposed to be built from Onieda, Tennessee to my town of Albany, Kentucky. Its intentions were to spur the development of coal and lumber properties in the region. But, the Oneida & Western disappointed its supporters by never reaching Albany. Instead, the Oneida & Western became a short line railway, stretching only 25 miles from Oneida to East Jamestown. At Oneida, the short line connected with the Cincinnati, New Orleans and Texas Pacific Railway.

Incorporated on September 18, 1913, the railroad line opened the rugged gorge through which the Big South Fork of the Cumberland River flowed to natural resources extraction. Much of the lands in the region, collectively known as "the Big Survey," were owned by Stearns Coal & Lumber Co. Scott County prospered during the era, but the Great Depression took its toll on the railroad, and as natural resources in the region played out, the Oneida & Western was no longer needed. A court eventually granted a request for the railroad to be abandoned, and the last train traveled on the rails in 1954.