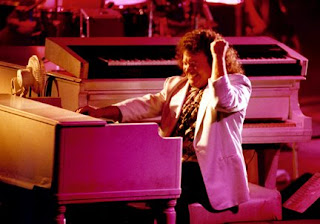 Billy Powell died today at his home in Florida. Around the age of eight, his mother signed him up for piano lessons, but his piano teacher said he did not need her. In high school, Billy met Leon Wilkerson, future bassist for Lynyrd Skynyrd. Powell was first hired as a roadie for the band. One day, in 1972, as the band was sitting up to play a school prom, after his duties were finished, Powell sat down at a piano in the corner of the stage and began playing his own version of Free Bird. Immediately, lead singer Ronnie Van Zant was impressed and invited Powell to join the group at its new keyboard player. The rest was history.

Three days after the release of its later release, Street Survivors, an airplane Lynyrd Skynyrd had chartered crashed into a forest near McComb, Mississippi. The crash killed Van Zant, guitarist Steve Gaines, his sister and backing vocalist Cassie Gaines and assistant road manager Dean Kilpatrick. Powell walked away from the crash with severe facial lacerations, almost completely losing his nose, but was otherwise relatively uninjured. He was the only member able to attend the funerals of his fallen bandmates.

During the time between the plane crash and the Lynyrd Skynyrd reunion in 1987, Powell briefly joined a Christian rock band named Vision. His keyboard playing was often spotlighted in Vision concerts. Powell also spoke during the concerts about his newly found faith in Jesus Christ. Lynyrd Skynyrd reunited in 1987. The band was inducted into the Rock and Roll Hall of Fame in 2006.

Just before 1:00 a.m. this morning, Billy Powell dialed 911 from his condo in Orange Park, Florida, complaining of difficulty in breathing. Paramedics found him unresponsive in his bedroom still holding the phone. He was pronounced dead at 1:52 a.m. The official cause was listed as a heart attack. Powell had a history of heart trouble.

Billy Powell was unduplicable. As a piano player myself, I drooled at his playing. In my mind, he was THE best! Skynyrd was known for its triple guitars, horns and female background singers, but Billy Powell was the icing on the cake. He caused Lynyrd Skynyrd to be 'Honky Tonk," because he was all that and more! His phenominal playing breathed an endless life into those songs that will remain forever etched in the hearts of southern rock lovers.

Fly Free as Bird Billy Powell! You earned your wings!