Elijah To The Rescue! 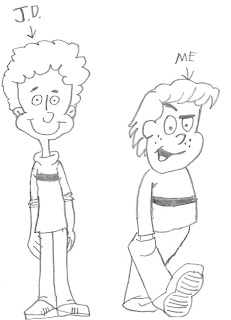 You know how it is growing up with sibilings. Most of the time you get along with one another, but there are those moments when you are no longer siblings.....you are rivalries. It's those times when brotherly or sisterly love goes out the window, and all you can think about is beating the living daylights out of each other. You know what I'm talking about But, normally sibilings will go the distance for each other. In the end, sibilings will do whatever it takes for one another. And, that reminds me of a story.

Elijah was 14 months old, and since they are ten-and-a-half months apart, that means J.D. had just turned two. Both had contracted a virus that was going around, and both were in hospitalized -- in the same room. J.D was in a regular hospital bed, while Elijah was in a baby bed. Now, J.D. hated IV's. I learned that after he contracted whooping cough when he was 6 weeks old, and they had to stick him so many times it wasn't even funny. It was war each time they went to put an IV in him.

So, anyway, by this time J.D. is much older, and here they are in the hospital, in the same room and a couple of nurses come in and announce they have come to insert an IV into J.D. They tried to insert it and he went ballistic on them. After a couple of other failed attempts, one of the nurses pushes the intercom and requests backup. More nurses come and grab J.D. trying to keep him still long enough for the IV to be inserted. Poor J.D., he was totally surrounded. He was wayyyyyyyy outnumbered.

The whole time, Elijah was standing up in his baby bed with a bottle of juice in his mouth and his eye on the proceedings across the room. J.D was screaming LOUD! His face was blood red. He did not want that IV in him! I look over at Elijah for a second or two and his eyes are going back and forth from J.D. to the nurse, who is trying to stick that IV in him. J.D. is screaming NO! NO! NO! As I turned back to look at J.D., suddenly, out of nowhere, I saw a bottle of juice flying through the air in speedy line drive fashion - from Elijah's bed straight to the forehead of the nurse who was trying to insert that IV into J.D.'s arm. BAM! He beaned her big time with his bottle! Right smack dab in the middle of her forehead! I turned to look at Elijah and he was standing there in the corner of his baby bed with his arm outstretched and his finger pointed directly at those nurses, and he was screaming a line of jibberish like you never heard! I have no way of knowing what he was saying, but he knew and he was dead on serious. I honestly believe that if he had been able, he would have climbed up on the corner of that baby bed, just like Macho Man Randy Savage, and came flying off the top rope with a drop kick on that nurse. And then, amid all the laughter, my eyes veered over toward J.D.'s bed and there he lay stunned, with mouth wide open and eyes big as half dollars, watching Elijah kick butt. He had forgotten about screaming. He had forgotten about tears. The struggle had left him. He didn't even notice as the nurse grabbed the IV and calmly, and easily, inserted it into his arm. As soon as the nurses had all left the room, I went over to Elijah to give him his bottle back, and to do a bit of celebrating. You know, "Way to go tough guy!" That sort of thing. He just took the bottle from my hand, put it in his mouth, and went about his business like nothing had happened. All in a day's work, I guess! 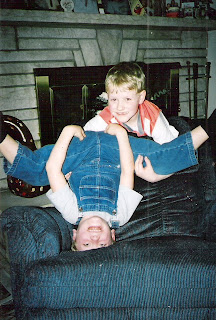