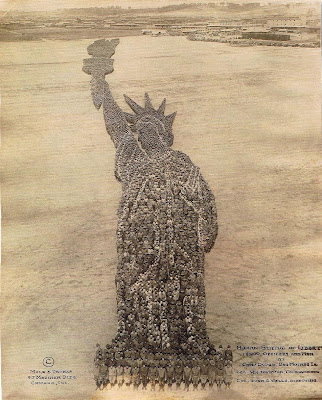 18,000 soldiers of the 163rd Depot Brigade at Camp Dodge, Iowa formed the silhouette of the Statue of Liberty for this renowned photograph shot by Chicago photographers Arthur Mole and John Thomas on August 22, 1918. Beginning at 1:00 p.m. companies were assembled and by 2:30 the proper formation was completed and the photograph taken. From the goddess’ feet to the tip of the torch the symbolical statue measured 499 yards. The picture was taken from a tower forty feet high, constructed for the occasion. On account of the mass formation and the 94 degree heat, twelve men fainted and were carried from the field.


The photograph was taken with an 11" x 14" view camera following several day’s worth of work by the photographers to set up the image on the ground using thousands of yards of white tape. In addition, substantial coordination was required to ensure the various folds of the gown, the bible, the left hand, and the crown was properly outlined by soldiers wearing white shirts. The design for the living picture was laid out on the drill ground at Camp Dodge, west of current building S 34 and Maintenance Road. The photograph was on sale for $1 at all the exchanges in the camp. Many soldiers sent the photo home to their families.

The layout at the reported 499 yards was nearly 5 times the length of the actual Statue of Liberty and the viewer will note that the correct perspective is maintained. The number of men in the various parts include: Flame of Torch – 12,000 men, Torch – 2,800, Right Arm – 1,200 men, Body, Head and balance of figure – 2,000 men.

"Human Statue of Liberty" was one of a series of group photographs taken by Mole and Thomas during and immediately after World War I at U.S. military training camps. Each took up to a week to compose and shoot using an 11" x 14" view camera perched atop an 80-foot tower. According to photography historian Louis Kaplan, these so-called "living sculptures" served as "rallying points to support American involvement in the war and to ward off isolationist tendencies."