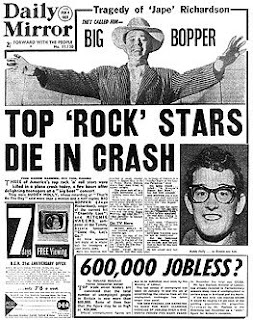 As the small caravan of vehicles departed the Iron County maintenance garage in Hurley, the sheriff’s deputies leading the rescue must have wondered if they would find any survivors at all. A trucker had notified the sheriff’s department that a group of men -- without hats, gloves or heavy winter coats -- was standing outside a stranded bus about 15 miles south of town. Any person exposed to Artic cold without proper clothes or shelter would be in serious trouble -- life-threatening trouble. Every minute that passed made it more likely that the people stuck out on Highway 51 were dying or dead of exposure.

One mile north of Pine Lake, the sheriff’s deputies found the darkened bus on the roadside. Stepping inside with their flashlights, the deputies were greeted by a group of pale and weak young men, some of whom had been huddled together under blankets. One person couldn’t stand up. Maybe the only thing that kept the group alive was the fact that they had no idea how close they were to dying. They were musicians – rock-n-rollers – on their way to Appleton, Wisconsin after a show in Duluth, Minnesota. A number of the young men hailed from Texas, another was from southern California. None had ever experienced weather like this.

The deputies heard of one of the singers. His name was Buddy Holly.

Buddy Holly had rocketed up the music charts in 1957 with songs like "That'll Be The Day and Oh Boy!" He had spent 1958 touring non-stop, yet by the end of the year, thanks to bad management, he was broke. With Buddy and his new wife, Maria Elena, expecting a baby and with Holly desperately wanting to create his own record company and recording studio, Buddy reluctantly agreed to headline the Winter Dance Party of 1959 because it offered quick cash. But, the tour schedule was absurd. Tour organizer, General Artists Corporation, accepted any offer that came along and filled the dates regardless of the distance involved. The group had to endure daily bus travels back and forth across Iowa, Minnesota and Wisconsin. Buddy ignored the premonitions that both he and Maria Elena had had. He would never know that his friend, Peggy Sue, had also had the same premonition.

Wisconsin was experiencing the deadliest winter in decades. Fourteen weather-related fatalities occurred in January alone. Temperatures had plunged with the start of 1959 and remained below zero for more than three weeks straight when a winter storm dumped 13 inches of snow on the region.

6,000 young people showed up at George Devine’s Million Dollar Ballroom in Milwaukee on the tours first stop on the 23rd to hear Buddy Holly and the Crickets, Big Bopper, Dion and the Belmonts and Richie Valens. To those who came to see the show, it all seemed so perfect. The headline in Milwaukee read, "If You Haven't Heard Them, You Haven’t Lived, Man!" But, away from the stage, for the singers and the musicians, things were about to go from bad to worse. GAC had accepted the lowest bid for the bus service and there were constant problems. “Such lousy old buses,” Holly’s guitarist Tommy Allsup would bitterly recall decades later. “They weren’t really buses. They were jokes.”

Traveling on two-lane roads covered with ice and snow drifts, the tour plunged into the initial leg of its schedule: Kenosha’s Eagles Ballroom to Mankato, Minn., 350 miles; Mankato to Eau Claire’s Fournier Ballroom, 170 miles; Eau Claire to Montevideo in western Minnesota, 230 miles. Drummer Carl Bunch’s toes began to tingle. In Eau Claire temperatures dropped to minus 25. At first, the musicians endured the uncomfortable bus conditions. Within days, however, the group’s discomfort began to deteriorate to treacherous levels. Carl Bunch began losing the feeling his feet. The tour trudged on to St. Paul, Minn., and Davenport and Fort Dodge, Iowa. The bus heater rarely worked. Bunch began having trouble coordinating his feet. From Fort Dodge it was 370 miles north to Duluth, Minn. That night at the Duluth armory, a young Robert Zimmerman angled close to the stage as he could possibly get. He was mesmerized by Buddy Holly. Zimmerman, who is known to the world as Bob Dylan, would later say he stood three feet from Buddy Holly that night and that once Buddy looked right at him, and it was if something passed between them.

After Duluth, the group started the 340-mile trip to Appleton. Wind chills were estimated at minus 40 or worse. Turning south on U.S. 51 shortly after midnight, Feb. 1, disaster struck 15 miles south of Hurley. The bus died. Ill-prepared and sickly, members of the tour party were trapped in the worst possible predicament. The temperature inside the bus was roughly the same as outdoors, with pounding winds sending drafts through the windows. Frozen tree limbs were snapping like twigs in the wind, crashing to the ground in the forest surrounding the group. The group began burning newspapers in the aisle for heat, which provided only a few fleeting moments of relief. Carl Bunch was succumbing, now unable to move his legs at all. Some of the musicians stepped outside hoping to flag down a vehicle. To their horror, not a soul was traveling. The group was in serious danger. With no other option, the men grabbed their instruments and began a jam session in the bus to stay active. Carl Bunch prayed for deliverance. After an hour, the group saw the headlights of a semi-truck approaching through the darkness. They hurried off the bus and into the middle of the road. The trucker slowed enough to maneuver around the men but never stopped. Dejected, the musicians filed back on the bus. After two hours on the roadside, the Iron County deputies arrived. The trucker had notified the police when he reached town. The group was taken to Hurley’s Club Carnival Café, where they were fed breakfast. Carl Bunch was rushed to Grand View Hospital in Ironwood, Michigan.

Despite the ordeal, the group was instructed to fulfill the Green Bay performance that night. Afterwards, they were desperately looking forward to a scheduled day off to recuperate from their harrowing experience, but were told by GAC that another show had been added in Clear Lake, Iowa.....357 miles away. To their dismay, after the show, they walked outside to leave and there in front of them....the same bus that broke down in Hurley had been delivered to Green Bay, supposedly repaired. It sputtered down U.S. 41 and 151 until it finally died, again, somewhere in Iowa the next day. The group abandoned it on the side of the road.

After the evening’s performance at the Surf Ballroom in Clear Lake, the tour was scheduled for another ten-hour ride to Moorhead, Minn. CAG had arranged for a school bus to get them there. But, Buddy Holly had had enough. He chartered a small plane to reach Moorhead. That would leave time to recuperate in a warm hotel room and get his filthy laundry done. Richie Valens and the Big Bopper, who was sick with the flu, asked to fly along.

The wreckage of their plane was found early the next morning along a fence row on Albert Juhl's farm just outside of Clear Lake. There were no survivors.