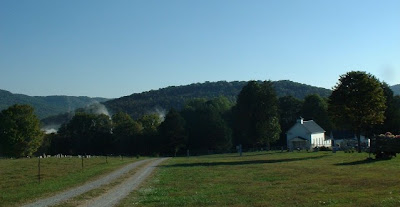 When Kentucky's 7th Mounted Volunteer Regiment was organized for the Thames campaign during the War of 1812, William Wood was named Captain of Company Three. His Lieutenant was my ancestor, Arthur Robinson Frogge.

The United States had declared War on England for its continual blockade of American ports and aggression on the seas. The act of war was signed by President James Madison, Arthur's second cousin and Arthur enlisted right away. In 1795, he and three of his brothers had been among the first settlers to migrate west, and due to his expedition experience, Arthur was given the rank of Lieutenant. At Lake Erie, the Kentucky troops formed a large percentage of the American forces that would fight the Battle of the Thames. Arthur suffered an ankle injury during the battle, which the U.S. forces won.

When he was 19 years old, Arthur fought in the French and Indian War. Afterwards, he and his brothers, and their families, packed up their belongings and moved west to the Three Forks of Wolf River, which would later be named Pall Mall, Tennessee. The place were Arthur and his family first settled became known later as Frogge Mountain (see the photo above).

The very first settler along Wolf River was a fellow by the name of Conrad Pile, the great-great-grandfather of Sgt. Alvin C. York. According to legend, Conrad, also known as Coonrod, was all alone in the Three Forks of Wolf River. He found a place that was to his liking. It had a spring of flowing water that was cool and clear. And just above the spring was his temporary home...a cave. Coonrod knew that others would be along soon and he kept a fire burning in front of the entrance to a cave, so that anyone coming his way would see it. It wasn't long until other travelers saw the smoke from his fire, and came and settled in the valley. Among the very first to come after Coonrod was Arthur Robinson Frogge and his brothers. The funny thing is....Coonrod thought that he had settled in Kentucky. He had missed it by about ten miles. And, I don't know if Coonrod told Arthur that or not, but soon Arthur left Coonrod and others who had migrated to the Three Forks of Wolf River and settled in Kentucky. He was among the first to settle in this area, purchasing land north of Stockton's Valley on Indian Creek. After the War of 1812, he purchased land west of Stockton's Valley on Ill Will Creek, not too far from where I live today.

There are no stories around to tell us the kind of life that Arthur or Coonrod, or any of the others who first settled at Pall Mall, might have lived. I'm sure they had enough adventures to fill several books. There are no stories about Arthur and William Wood and how they survived the awful cold in the Great Lakes region as they fought side by side against the great indian chief, Tecumseh. What is known, though, is that Arthur, like most early settlers, was not afraid to fight for his country, and for the new territory he had been among the first to settle in. Arthur and others sacrificed plenty in their westward journey. They fought bravely to establish the freedoms we enjoy today, and I am proud to have inherited those freedoms they fought for and sacrificed for.

To explain a little more about who Arthur Frogge was....if you read my story, The Killing of Elijah Koger, Arthur was the grandfather of Elijah's wife, Nancy. They were the grandparents of Nannie Koger Boles. Nannie was my great-grandmother.