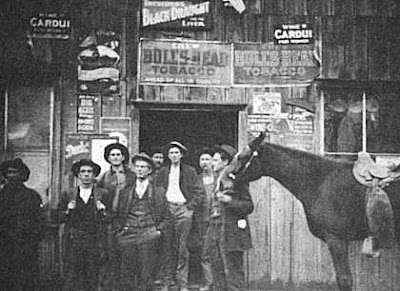 This photo was taken around 1912 and is of Porter Woods' Store at Boatland in Fentress County, Tennessee.

Later, his son, Samuel, also known as Mark Twain, wrote "You would not know that Obedstown stood on the top of a mountain, for there was nothing about the landscape to indicate it--but it did: a mountain that stretched abroad over whole counties, and rose very gradually. The district was called the "Knobs of East Tennessee," and had a reputation like Nazareth, as far as turning out any good thing was concerned." The Gilded Age: A Tale of Today (1873).

'Obedstown' is a reference to Jamestown, the seat of Fentress County. Boatland is located off Highway 52, a two-lane road that winds from Livingston to Jamestown, Tennessee. It's about 35 minutes from me. The place was called Boatland because of the flat boats that came up the Obed River to pick up tar, turpentine, and other products of the area to take to Nashville and other markets on the river waterways. John Clemens had also owned property one block from where the Jamestown square is today. His land was adjacent to a spring, which was a source of water for the early settlers. Today, it is known as Mark Twain Spring Park. Mark Twain was not born in Fentress County, but he was conceived there. He was born five months after his parents moved to Missouri.

As far as that line which Twain wrote about turning out any good thing, Boatland sure has had its share of celebrities. John Clemens is not the only person with a connection to fame to live at Boatland. Davy Crockett spent the winter of 1817 in a hunting cabin there. Records of his possessions and improvements are in several old deeds. Another famous resident of Boatland was Tinker Dave Beaty, who formed "Beaty's Independent Scouts," during the Civil War to protect residents and their properties from thieves and thugs like Champ Ferguson and his band of bushwackers.

And, then there's the story of Old Man Stout, who lived a reclusive life. It is said that Stout did not attend church, and sat up late at night reading strange books. He was accused in 1835 of being a witch and of bewitching a neighbor girl. Stout was arrested by a large posse armed with guns loaded with silver bullets and taken before Justice of the Peace Joshua Owens. At his arraignment, witnesses testified that they had seen Stout 'escape from dwelling houses through the keyhold in the doors' and that he had 'thrown people and animals into strange spells by his influence when they were miles away from him.' The testimony caused Stout to be held for the grand jury. But, Judge Abraham Caruthers and attorney general Joseph B. McCormick refused to indict Stout, which almost precipitated a riot in the courtroom. Old man Stout sued the officers and posse for damages. The people's defense was that Stout was a criminal under a statue of Henry VIII and James I that made witchcraft a felony. And, even though this was 1835, they claimed this particular statute had never been repealed in Tennessee. But, the Judge said the statute had never been in effect in Tennessee. Thus, the trial ended with the conviction of the people who made the initial arrest.

Portions of this story was based on these works: Touring The East Tennessee Backroads by Carolyn Sakowski and Boatland by Ruth Clark and Willie M. Gernt.