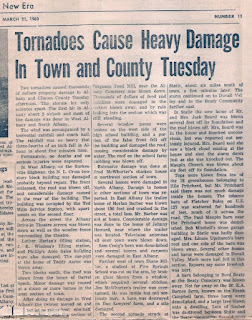 The date was Tuesday, March 19, 1963. 16-year-old Peggy Pickens was not at school that day. It was an unseasonably warm afternoon and it looked like it might rain. A dark cloud loomed on the horizon. Sure enough, along about two o'clock, a strong wind arose, accompanied by much hail and a torrential rainfall. Three-fourths of an inch of rain fell within five minutes. And then, the worst happened. Two tornadoes struck minutes apart. The first one hit West Albany, ripping the front off Ted Mills' Service Station on the Burkesville Road. Across the street, it brought down the Albany Drive-In Theatre screen. Several other businesses in or near West Albany were damaged, including Luther Harlan's Filling Station, Phillips Auto Sales and Wisdom Filling Station. Ferguson Feed Mill near Albany Cemetery was heavily damaged. A second tornado struck about the same time in the Static, Beaty and Duvall Valley communities. The Maupin United Methodist Church building was knocked six feet off its foundation. The home of Mr. and Mrs. Jack Beard was damaged. Mrs. Beard was knocked unconscious but was not badly injured. Back in town, several homes reported damage. The worst damage occurred at a residence at the end of Hopkins Street...601 Hopkins Street to be exact, two blocks south of Ted Mills' Service Station. In that apartment, which was above a garage, a grandmother, who was baby-sitting, had sought safety underneath the kitchen table. In one arm was her three-month-old grandson. In the other arm was his two brothers, ages 3 and 4, and sister, age 2.

I was the three-year-old.

There had been almost no advance notice. My grandmother would later say she looked out the window just in time to see a huge black cloud coming straight at us. There wasn't enough time to run downstairs and then over to the basement in her home. We were stuck there and my grandmother knew it. Seconds after climbing under the small kitchen table, she realized that with her arms busy holding her grandchildren, she had no way of holding onto the table. She shouted for my older brother and me to run to our parents' bedroom and get under the bed. But, just as quickly as we got there, we realized we were alone in a dark room, and for a couple of 3 and 4-year-old boys, it was too much to handle, so we went running back to my grandmother.

Knowing the tornado was headed straight for us, it must have been horrifying for her to see us come running back to the table. She only had time to put her arm around us when the tornado hit. I remember a noise that was so loud. The tornado was right on top of us. Only a small kitchen table separated us from possible injury or worse. With four children tucked away under her arms, my grandmother leaned forward enough so that we were sitting in a crouched position with our faces almost directly on the floor. Later, she would recall the haunting sound of hundreds of nails being ripped out of the wood as the roof came off. What a brave woman she was that day.

The roar of the tornado was defeaning. It was followed by an eerie calm, almost in slow motion, as we peeked out from under the table. Where the ceiling used to be, there was only the sky. Suddenly, it began to rain.

As we began to crawl out from under the table, the front door to the apartment burst open and in walked a strange girl. Her name, I would later discover, was Peggy Pickens. As fate would have it on that day, Peggy and a friend, who had skipped school with Peggy that day, were walking along Hopkins Street, near our home, when the tornado hit. 22-year-old Weldon Gibson's family lived behind our home. He ran to our home just seconds after the storm had passed. The stairway leading up to the apartment had been pulled loose from the side of the building and were badly beaten up by the storm. There was a big open space between the platform at the top and the door leading to the apartment. While Peggy's friend waited below, Peggy and Weldon cautiously, and courageously, began climbing up the loosened stairway. Step by step they climbed, higher and higher, until they finally reached the door to our apartment, and then, one by one, they carried us to safety below. The storm was over, and so was the nightmare it had brought to us, especially to my poor grandmother.

I do not know if there was ever any public acknowledgement of the brave rescue made by Peggy Pickens and Weldon Gibson that day, but I do know that my family has never forgotten it. To us, they will always remain our heroes.

Peggy Jean Pickens Winningham passed away in 2009 at the age of 62. She was the daughter of Jonathan and Gleah Wright Pickens and wife of State Representative Leslie Winningham. 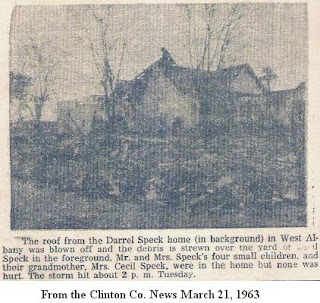