Peace To Die For: The Killing of Elijah Koger 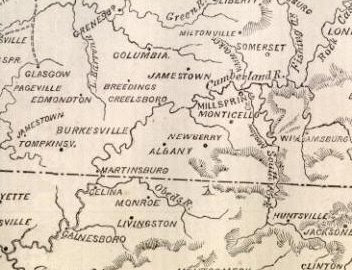 By the spring of 1862, only two real Civil War battles had been fought in Kentucky, but everyone was nervous and no one could be trusted. To make matters worse, Confederate guerilla Champ Ferguson was on the loose wrecking havoc everywhere he went. He had already killed ten people, and the war was barely begun. Men, afraid of being singled out for taking sides, had to hide both day and night.

Not everyone was into the war, but most everyone had something to fear because of it. Murderers and thieves took advantage of the men folk being away at war and went into homes and businesses, taking whatever they wanted, or killing whomever they wanted. Arson, theft and murder had also begun to run rampant in other areas along the border of Kentucky and Tennessee.

So it was that sometime in late March of 1862, a meeting was held at Monroe, Tennessee beween a group of citizens from Overton County, Tennessee, representing the Southern element of the war, and a group of citizens from Fentress County, Tennessee, and Clinton County, Kentucky, representing the Northern element. The purpose of the meeting had been to reach a compromise whereby raiders would stop wrecking havoc in those three counties. The meeting had been a success. The parties agreed not to raid into any of the adjoining counties, but it would soon be evident that not everyone who attended the meeting wanted peace.

This is the true story of my great-great-great-grandfather, Elisha or "Elijah" Koger. Elisha had headed up a group of home guardsmen who kept watch over Clinton County. One of their jobs was to keep up with the whereabouts of Ferguson. His role in the home guardsmen would explain why Elisha Koger was one of the men chosen to work out the peace agreement at Monroe. Because he was one of the men responsible for most of the raids and most of the deaths, Ferguson was also at the meeting. Even though a compromise was reached, it became apparent that Champ Ferguson did not want his reign of terror to end. After leaving Monroe, he and his men killed four people. The peace agreement had ended before it could be realized. Four people were dead. What Elisha and the other Union representatives who attended the Monroe Compromise did not know was that Ferguson hated the Union side so much that just their presence at the peace agreement was enough for Champ to want to kill them. They would soon pay for trying to bring peace to the community.

On the morning of Sunday, June 1, 1862, Elisha or "Elijah" Koger arose from his bed and headed out to the spring with his wife, Nancy, beside him. Shots rang out as a band of men appeared suddenly out of nowhere. Nancy screamed fo Elijah to run. As he tried to flee, Ferguson overtook him and shot him. Koger threw up his arms and said something, but Nancy could not make out his words because the couple's children were screaming. Shots continued to ring out as Elijah ran toward a fence some fifty yards from the home in the Oak Grove community. With Ferguson and nine other men following him, Elijah reached the fence and when he tried to cross it, Ferguson rode up close to him and shot him one more time. By the time Nancy reached the fence, the couple's 11-year-old daughter, Sarah, was holding her daddy in her arms. She was covered in blood. When Nancy reached Elisha, he gasped once, but never spoke. He had been shot more than 30 times. Nancy knelt beside her slain husband's body as Ferguson and his outlaw gang ransacked the Koger home.

Elisha Koger had successfully helped to arrange a peace agreement that would have stopped the senseless acts of violence in Clinton, Fentress and Overton counties and was violently killed for his efforts. Three other Union representatives who attended the Monroe Compromise were also killed.

On October 20, 1865, Champ Ferguson was hanged for the crimes he had committed during the civil war, including the brutal murders of Elisha Koger and 52 others. Nancy Koger was one of those who testified at his trial.

Elisha or "Elijah" Koger was the grandfather of my great-grandmother, Nannie Koger Boles.