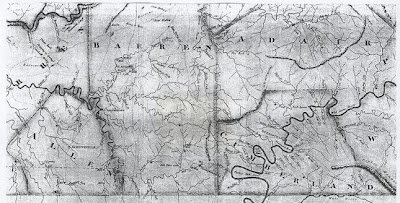 At a business meeting of Clear Fork Baptist Church in May of 1855, church member Isaac Wright was accused of drinking too much. His response was, 'I do not remember it!' (Honest...it is written that way in the official minutes.)

Well, at least the brother was honest! I suppose after thinking about it, Bro. Wright apparently was able to recall the incident because at the next month's business meeting, he said he DID NOT drink too much! The Church did not believe him.....and the members kicked him out! His wife, Elizabeth, did not take the news sitting down. She stood up and requested a letter of dismission, and at the same time, tried to make some sort of accusation against Bro. Joseph Denton regarding a deposition he had made in an Overton County lawsuit. I don't know what that had to do with her and Bro. Wright's situation, unless it was Bro. Denton who accused Bro. Wright of drinking too much. But, anyway, the deposition was read, but the Church found no fault with its pastor. Sister Wright withdrew from the Church.

I know the way that occured is funny to read, but in reality there is more to the story, because, you see, Brother Isaac Wright was also known as....Deacon Isaac Wright. He had been a deacon for almost six years when this episode occured. And....before that he had been a trustee of the Church from 1844 to 1849.

Isaac and Elizabeth Wright had migrated to Kentucky from Virginia. Both had been born in North Carolina; Isaac in 1789 and Elizabeth in 1803. They arrived in Clinton County in the early spring of 1841, and became members of Clear Fork Baptist Church in May of that year. From 1841 to 1855, Bro. Wright had been VERY active in Church affairs. It is proof that we all sin. No one is immune to it. Some do it more than others, sure. I am just thankful that Jesus forgives us of our sins if we ask Him too.

Isaac Wright was still living when the 1870 census was taken. He was 80 at the time. In his life, he was a wheelwright and a farmer, while Elizabeth was a weaver. The Wright's had five children; four boys and a girl.

Note: I found this entry in the minutes of the meetings from July of 1874: James Craig [is] retained as sexton (in charge of the maintenance of the Church building and/or grounds.), and "Sister Remelia Talbott will SWEEP the house!"