Absorbed in melancholy mood today,
I stood among the Crosses where they lay:
Heroic Dead, unmindful of acclaim
Or tribute paid to their undying fame:
The men who paid the utmost price that we,
By vigilance, may e'er continue free
To hold aloft the torch of Liberty.
A Gold-star mother moved among the rows,
She stopped by sacred spot
where one of those
Who slept in peace and undisturbed repose,
And there she died again,
-- the thousandth time.
Intrusion, then and there
Seemed short of crime.
Soliloquizing on the solemn scene,
My words reverberated clear and keen:
"Hail, Buddy! We die but once.
Know what I mean?"

Written by Sam H. Beaty on May 30, 1966. Originally from Fentress County, Tennessee, Hollins enlisted in the Army at Ft. Oglethorpe, Georgia at the outbreak of World War I. He served with distinction with the Fifth Infantry Red Diamond Division in France, reaching the rank of Sargeant. Later, he became a Captain in the U.S. Army Reserve. He died on January 29, 1975. 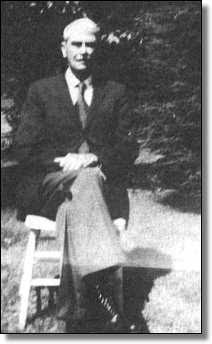