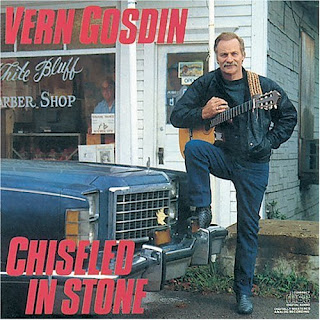 One of my all-time favorite singers died this past Tuesday. Vern Gosdin had suffered a stroke at the beginning of April and died peacefully in his sleep at a Nashville hospital. He was 74.

Just the other day, I wrote a story about when my late uncle Wallace Allred owned the Ritz theatre in Livingston and how, in the earlier days, Ira Louvin used to climb up on the roof of the Ritz and perform. Vern Gosdin idolized Ira and his brother, Charlie, known to the world as The Louvin Brothers. He incorporated their style, and that of The Byrds, in with his own style and then gave the world something truly wonderful. As a child, Vern began singing in a church in Woodland, Alabama, where his mother played piano. As a young man, he sang in a gospel quartet called The Gosdin Brothers. Nicknamed "The Voice," an inheritor of the soulful honky tonk style of Lefty Frizzell and Merle Haggard, Vern Gosdin rose to the top of the business and notched hit after hit.

The one thing that forever attached me to him was how he dealt with his divorce in 1989. His album Alone was a concept album full of traditional country songs that chronicled the dissolution of his marriage. If I remember correctly, he scored nine big hits from that break-up. Songs like, Chiseled in Stone, which won the Country Music Association's Song of the Year award in 1989, Right in the Wrong Direction, That Just About Does It and Is It Raining at Your House.

What really got me was how he had the courage to let the world see into his heart, and how he was able to turn his emotions into songs that literally became mega hits. He taught me that it was okay to let the world see you cry; that it was okay to put yourself out there where people see you, even in your time of struggle and despair. It took a long time for me to gain the courage to let you read my stories or listen to my songs. I owe it all to Vern Gosdin. His ordeal has been played and replayed in my mind so many times, and I have leaned on him and his story so often, even though he never knew it.
You don't know about lonely
Or how long nights can be
Till you lived through the story
That's still livin' in me
And you don't know about sadness
'til you faced life alone
You don't know about lonely
'til it's chiseled in stone
at May 01, 2009