On April 15, 1863, Jacob Jackson Andrew signed up as a member of the 32nd Kentucky Infantry, whose primary objectives were to prevent incursions by raiders and guerillas, and to protect the capitol city at Frankfort during the Civil War. Andrew performed his duties faithfully until early 1864, when the U.S. government began disbanding many of its units. The 32nd Kentucky was included in the down-sizing and so, after nine months, Jacob Andrew's time of service in the Civil War ended.

Following the war, Jacob became a successful miller. His life was as uneventful as any other man of his time. He was born April 9, 1838 to John C. and Elizabeth Cooper Andrew. He married Luretha Sandusky on April 29, 1858, and he died on November 29, 1889.

It was what happened AFTER Jacob's death that proved to be unusual.

In the 1890's, Congress passed a bill entitling all Union veterans to a marble tombstone for the 'services rendered to a grateful nation.' Entitlement required an applicant to have served at least six months with an honorable discharge and proof of service, etc.

Someone in Jacob's family took the time to make an application on behalf of their late relative. The request was approved and the tombstone was made, more than likely in New Albany, Indiana.

Inscribed on the tombstone was:

A lot of work and expense went into making the stone and then getting it to the cemetery where Andrew is buried. If it was made at New Albany, Indiana, then it had to be put aboard a steamboat on the Ohio River, and then taken downriver where it would have been transferred over to another boat on the Cumberland River and eventually making its way to Albany landing, where it would have been loaded onto a freight wagon and driven to Albany, and finally driven by private wagon to Andrew's final resting place. But, that's where the story takes a bizarre turn.

After all of the effort that was made, incuding the making of the stone, and the time and expense it took to get the stone to the cemetery...

Jacob's tombstone was NEVER set onto his grave! For 120 years, the stone lay on the ground...untouched.

As fate would have it, last October, while Andrew Cemetery was being cleaned up, Jacob's tombstone was FOUND buried beneath a pile of brush.

One of my readers, friend Kelly Upchurch, suggested that perhaps the family was split on their loyalty, North or South, and didn’t want the Yankee headstone in the cemetery. He is probably correct in his theory. Even today, North versus South emotions still exist. I had family on both sides of that war. One of my pro-Union ancestors on my mom's side was killed in the war, while one of my pro-Confederacy ancestors on my dad's side struggled after the war because the government would not approve his pension.

As far as Jacob Jackson Andrew is concerned, they say every tombstone tells a story. Now his story, at least some of it, will be known to anyone and everyone who visits his gravesite. This Friday, the local Veterans of Foreign Wars will conduct a service at Jacob's grave. Finally, Jacob Jackson Andrew will officially be laid to rest. 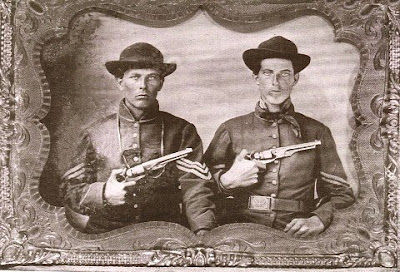