A New Beginning (In Days Of Old Lang Syne)

"Each new year is like a new chapter in our lives. As 2010 approaches, I am aware of the prospects of a new beginning that lies ahead, and I, for one, am looking forward to it with great anticipation, and hope. God has blessed me with a beautiful family, a great Church family and many friends. For each of those things, I am thankful." - The Notorious Meddler 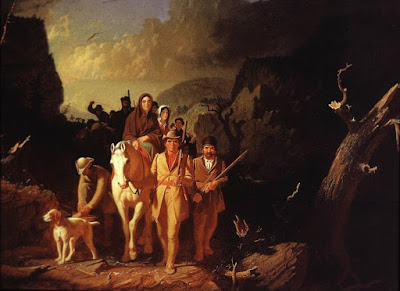 When I think of new beginnings, I can't help but think about the Samuel Wood family. Samuel was the son of a woolcomber in Leicestershire England. His father wanted Samuel to follow in his footsteps, but he failed to complete his seven year apprentice when, in 1755 at the age of 18, he crossed the Atlantic in search of a new beginning. By the time the American Revolution began, Samuel was lame, and in poor health, and could not serve in the military, but he performed patriotic service for his new country by giving his pewter tableware to be melted and made into bullets. After the battle near Alexandria, he and his wife, Sarah, nursed the sick and wounded soldiers in their home.

Samuel and Sarah’s first four sons, William, James, Samuel, and Thomas were born near the great falls of the Potomac River. William served in the State Militia in North Carolina, protecting the settlers against the warring Cherokee and Creek Indians. He was a brave man who quickly rose to the rank of Lieutenant. In 1800, William, his mother, and two younger brothers, John and George, journeyed through the Cumberland Gap to the sparsely settled Stockton's Valley, Kentucky, known today as Albany. Not long after arriving at Stockton's Valley, William was appointed Sheriff and Justice of the Peace. He later served in the Kentucky Legislature as both representative and senator. William was promoted to the rank of Captain during the War of 1812. He was reportedly present when Tecumseh was killed at the Battle of the Thames.

Williams brother, James, the second son of Samuel, volunteered in Capt. William Cross’ regiment during the War of 1812. Soon after Samuel, the third son of Samuel, and his wife, Naomi, were married they headed west to live at Stockton's Valley. Samuel and William were two of the 13 charter members of Clear Fork Baptist Church. William was the Clerk for 48 years, until his death in 1850. Samuel was the first appointed deacon of the Church. In 813 Samuel was appointed overseer of the construction of the Burkesville Road. Today a portion of that road is known as 'Wood Street.'

When Thomas, the fourth son of Samuel, arrived at Stockton's Valley, he began helping William in his surveying business. but when news of the death of his father was received in 1800, Thomas returned to Tennessee to handle the affairs. There, he met, and married, his wife Mary. After the birth of their first child, the couple headed back to Stockton's Valley. Mary often told her grandchildren of the trip through the Cumberland Gap, saying that she and their baby son rode on a sled made of poles and drawn by oxen, while Thomas walked, driving and often leading, the beasts over the rough trail. At Stockton's Valley, Thomas took an active part in Clear Fork, often filling in as clerk when William was in Frankfort serving in the State Legislature. Thomas was appointed deacon in July of 1811. History records that Thomas “loyally assisted General Andrew Jackson in the preparations for the battle of New Orleans in 1815, by helping to dig the saltpetre used for the manufacture of gun powder which make the old rifles of the Kentucky and Tennessee troops do such effective work." In 1834, Thomas traveled to Illinois to visit family members who had moved there. On his way back home, his boot rubbed a blister on his foot, resulting in blood poisoning that caused his death eight days after returning home.

The Wood family welcomed their new beginnings. Samuel left his family in England and sailed to America, in search of freedom and a new start. Following the American Revolution, he found both. And then later, walking in their father's brave footsteps, Samuel's children left their homes and boldly moved west into the new frontier, where they helped start a new community and a new Church....the same community and the same Church where I am proud to live and raise my children.

Auld Lang Syne basically means "days of long ago." The song asks the question should old times should be forgotten. After the sacrifices made by people such as the Wood family, I say not. Incidentally, the song, Auld Lang Syne, was included in Thomason's Select Songs of Scotland in 1799 -- the same year William Wood and his family began migrating west. I find that ironic.

In honor of the Wood family....'we'll take a cup of kindness yet, for auld lang syne.'