Hell in the Woods 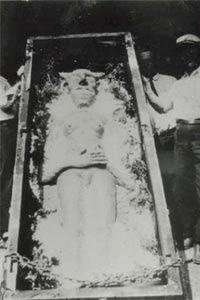 Helenwood, Tennessee, near Oneida, was one very disturbed community back in the early 1900's. Some said it is why the 'Devil' came to town.

Actually, the 'Devil' was brought there by Cruise Sexton. He has been a soldier in China, where he had viewed many statues which were both monstrous in size and appearance. When he returned to Scott County, he decided he would build one of his own. Back in the coal mines around Paint Rock, Sexton began building the "Devil" out of bed clay, spending days trying to get each detail perfect. When he finished, the statue was larger than the average size man and weighed over a ton.

The "Devil's" features included very distinctive horns that came from the forehead, great detail in the chest area, muscles of the arms that were outlined, and genitals that were vaguely present. It is even told that one of the arms was chained to a leg, which was also done in great detail. Soon, word of the deamon began to spread like wildfire. Passengers and workers on trains that came through the area from Cincinnati to Florida carried the story to far away places, and it seemed like the farther it went, the bigger the tale became. People began to talk about why it had come to Scott County. Before the statue showed up, many people had been killed in saloon fights, duels, etc., and, according to townsfolk, this was why the "Devil" had come.

Soon, people were wanting to see the 'Devil,' so Sexton placed it in a massive coffin at the railroad station. People from all around the country would stop.....and pay 25 cents for a twenty-five minute view the gigantic statue. Some were reported to have fainted from the sight of the demon. No one ever really understood that it was just a statue made from bed clay.

The statue was exhibited at the 1921 Somerset Fair. An exaggerated account of its appearance at the fair was published in the Somerset Journal, dated Sept. 9, 1921:

There was exhibited last week at the Somerset Fair, an object that attracted several thousand people into a small tent. The object....has the appearance of a petrified form, about five feet, ten inches long, large head with horns, large nose and ears, wings reaching to ankles and teeth showing. The arms are long and slender and are crossed over the body. The hands have extra long fingers and the ankles are enlarged. The form is now reposing in a box with iron bands around it, four pad locks on the box, nails driven in the lid and a guard standing watch.

The "Devil" ended up being sold to the World's Fair in Chicago and was never seen or heard from again in Scott County.

Just a few short years later, there was a huge blazing explosion in that area when twenty cases of dynamite and two hundred kegs of blasting powder stored at Webb's Mine Supply Store somehow ignited. The impact smashed or almost demolished every single building in town. The blast was heard as far away as Sunbright, twelve miles away. About 200 people lived in the little town and the entire community was literally wiped off the map by the explosion. The townspeople called the tragedy "Hell in the Woods", and thus Helenwood was born.