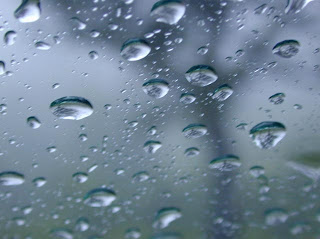 He said "Everytime I go to the dentist, it rains."

He meant it literally, because it was raining the other day when he went to get his new braces. It made me think about the trials and tribulations, the heartaches and pains, the sufferings, and all of the sad times I've had to endure in my life.

I thought about that Bing Crosby song, "Pennies From Heaven."

A long time ago, a million years BC
The best things in life were absolutely free
But no one appreciated a sky that was always blue
And no one congratulated a moon that was always new

I never wish for storms, but I know that, sooner or later, they are going to come, one way or another. I sure do get my share of them. I'm not here to complain, just making note. I know that it is while I am in a valley that I become stronger. I've heard it said that suffering produces perseverance; perseverance, character; and character, hope. The Bible says the testing of my faith produces endurance. I have the hope that God will not allow any trial to test me beyond my ability to bear it, but sometimes it is hard to see it that way when i'm in the middle of a storm.

Daniel calls me every day at work and recites the AM sign-off announcement to me. He even sings the little jingle that comes at the end of the announcement. That kid cracks me up. He'll say, "Hey Randy, what are you going to do if your 'baccer don't sell?" (a reference to the song my dad wrote.) I'll say, "I dunno, guess I'll start cuttin' bugwood," and he'll say, "Or maybe even whittling or swapping knives, or something like that?" (Which are lines in the song.)

I said, "Daniel, maybe it rains when you go to the dentist because of the pain you suffer from going there," thinking he would understand the metaphor. But, he said, "No, I just go to get my braces updated,"and then he changed the subject by asking me to play him a song, except he got mixed up and said 'thong' instead of 'song.' He was in the middle of doing his daily laundry chore when he called me. I didn't ask, but he caught what he said and laughed really hard.

I've been going around for three days now trying to get what he said out of my head, but it's no use, I can't.

Daniel was born premature almost 16 years ago, resulting in some problems that required many surgeries. Today, he is a living miracle - a crown jewel for sure! It makes me ashamed that I whine about my problems.

Thanks for the gentle reminders, Daniel. I hope your umbrella is always upside down when it rains.