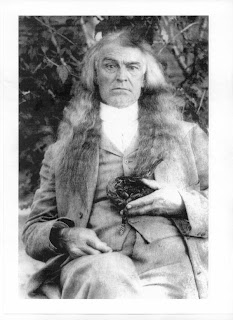 He was one of the finest herb doctors ever to live and work in this region. His vegetable and herbal remedies and his applications to relieve the ills of the 'modern generation' was widey known and accepted. His name was Pylap Medekle (Muh-Deekle), and he was born in the swamps of Florida on March 23, 1847. His father was the full-blooded Seminole Indian medicine man, Waco, who was born just before the revolutionary war and lived to the ripe old age of 115. Growing up the Florida swamps, Pylap became highly skilled in the arts of hunting and fishing, as practiced by the Seminoles. But soon, he began studing medicine under his father. Pylap made a business out of gathering herbs and selling them until 1868, when he began traveling as an Indian Medicine Man. Often times, he rode horseback for many miles to tend to sick patients. (Notice the rattlesnake he is holding in the photo.) 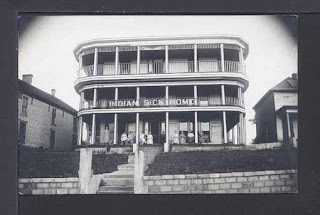 Around the age of 40, Doc Medekle decided to take his traveling medicine show off the road, settling in places like Pall Mall, Tennessee and Wayne County, Kentucky. In 1915, he moved his practice to Somerset, where he set up a herbal laboratory on Langdon Street, and also rented the Ferguson Hotel and began seeing patients there. In 1918, he bought an old home and turned it into a home for indians, who were ill. He called it - Indian Sick Home. It was there that he treated and cared for literally hundreds of patients from many different states. It is said that most patients found the course of treatment and the care so beneficial that they returned year after year.

Pylap Medekle died on October 28, 1928. He is buried at Pine Knot Cemetery. His funeral was attended by a great number of people who came to talk good about 'Doc Medekle,' and how he did his part to help a suffering humanity.