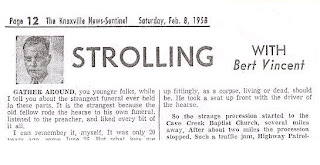 My story, Hell in the Woods, caught the attention of my dear friend, Al Cross, who is Director for the Institute for Rural Journalism and Community Issues at the University of Kentucky. Al forwarded the story to Anna Hoover, who happens to be from the place where my story came from, and who is a graduate student and employee at UK. In a reply to Al, part of which was sent to me, Anna mentioned a writer I had never heard of before.

Bert Vincent wrote for the Knoxville News-Sentinel for nearly 40 years, from 1929 until his death on September 26, 1969. It was at The News-Sentinel, and largely through his daily "Strolling" column, that Vincent captured the hearts and minds of millions of readers. Anna mentioned that I might be interested in looking over Vincent's collections and I could not wait to do that.

The result was this delightful tale, which was published in Vincent's column on Saturday, Feb. 8, 1958. This story is well worth re-visiting (a first-time visit for me), so check it out....

Gather around, you younger folks, while I tell you about the strangest funeral ever held in these parts. It is the strangest because the old fellow rode the hearse to his own funeral, listened to the preacher, and liked every bit of it all. I can remember it, myself. It was only 20 years ago, come June 26. But what jogs me into writing this piece is a story about it in Walter Pulliam’s Harriman Record.

The old fellow was Felix Bush Brazeal. He lived alone in a log cabin in the Dogwood community of Roane County. He was 73. His time was getting short. So, he got to wondering about what sort of funeral he’d get when he passed on. In his younger days he once had been charged with murder. He came clear of the charge. He was charged with other lesser crimes. But he changed and joined the church and had been living the best he could. He hoped for a good funeral, and he wanted to know about it while he could appreciate the folks who came and the words the preacher said.

So Uncle Bush cut some walnut trees from his woods and had them sawed into good thick walnut boards, and he fashioned these into his coffin. Then he hauled the coffin up to Berry’s Funeral Home here in Knoxville, to have it lined and fitted. Right there’s where Uncle Bush got himself right into the middle of big-time stuff without even aiming to. The News-Sentinel heard about it. The news spread all over the nation. It spread almost as completely and as fast as the big ramp eating at Cosby more than 15 years later.

The News-Sentinel brought Uncle Bush to the big city. He was dressed up in a complete outfit of clothes. He went to a picture show where saw his first talking movie. He was a guest on WNOX. He selected his pallbearers from among his fox hunter friends. He arranged with his favorite preacher, the Rev. Charles E. Jackson, to come all the way down from Paris, Ill., to say the funeral words. Mr. Jackson had formerly been pastor of Rockwood Christian Church.

Came that great hour, 2p.m., Sunday, June 26, 1938. The hearse from the Quinn Funeral Home in Loudon pulled up by Uncle Bush’s log cabin. The polished walnut coffin was lifted gently by the pallbearers and eased inside the hearse. Then the hearse was covered with flowers donated by florists in Knoxville, Chattanooga and Lenoir City. Uncle Bush came from his cabin all dressed up fittingly, as a corpse, living or dead, should be. He took a seat up front with the driver of the hearse. So the strange procession started to the Cave Creek Baptist Church, several miles away. After about two miles the procession stopped. Such a traffic jam, Highway Patrolmen said they never expected, and had rarely ever seen. Why, they said there were 8000 people at that funeral.

Highway Patrolmen finally got a line opened up. But while waiting, hundreds of “mourners” came to the hearse to shake hands with Uncle Bush and to “mourn” his “passing.” And all the time news photographers were snapping pictures, newsreel fellows were grinding reel after reel to be shown everywhere, and news reporters were taking notes and asking questions. The procession stopped where the grave tent had been set up. Here pallbearers lifted the coffin from the hearse, and carried it gently and carefully to the tent. Doleful music was furnished by a WNOX quartet, a quartet of Kingston citizens, and the Friendly Eight of Chattanooga. Fred Berry, Knoxville, sang a solo. The “corpse,” or Uncle Bush, took a seat by the walnut coffin. He listened intently to Brother Jackson say the words. Among those words were such as: “It might be wholesome for everyone to hear his own funeral while he is living…..” “Here we speak of life, for if life is all right there is nothing to fear about death. There are no tears and heartaches, but only happiness at this service….”

After the service Uncle Bush shook hands and talked with folks who gathered around him. Souvenir hunters stripped the flowers from the casket. So that was this strangest of all funerals in these parts. A funeral where the “corpse” was alive and able to appreciate all that was said and done. The coffin was hauled back to the cabin home. There it waited for the next, the final funeral for Uncle Bush Brazeal, which came nearly five years later, on Feb. 9, 1943. And again the Quinn Funeral Home was in charge. And again the service was at Cave Creek Baptist Church. But I do hear that Uncle Bush Brazeal maybe wouldn’t have been so happy if he had been living this last time. The weather was cold. The crowd was small.

This story came from Clan Breazeale. To see replica of original article as it appeared in 1958, Click here.

Thanks, Anna, for turning me on to the great Bert Vincent.