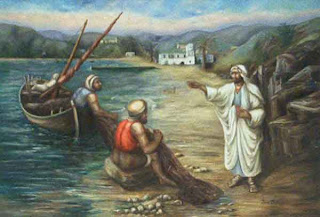 Who hath saved us, and called us with an holy calling, not according to our works, but according to his own purpose and grace, which was given us in Christ Jesus before the world began, 2 Timothy 1:9

Bro. Danny Whetstone is preaching at our Church this week. He is from Kings Mountain, North Carolina. So much of my Church's history comes from there, as does one of my ancestors, and researching it always gives me something great to write about.

This story begins with the Battle of Alamance, which took place on May 16, 1771. The Regulators, mostly Baptists with some Quakers, were attempting to regulate the behavior of Governor William Tryon and his appointed agents who ruled the colony of North Carolina. The state church of the colony was the Episcopalian church. Tryon had imposed unjust taxation on the frontier settlers. The officials of the state 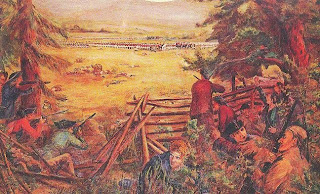 were corrupt enough to pocket a large portion of the excessive taxes they collected. Before his death, the great preacher, Shubal Stearns, had organized Sandy Creek Baptist Church. It was 600-plus members strong. The government regarded Baptists and Quakers as enemies of Anglican order and, because of the success of their evangelism of Stearns and others, a hindrance to the growth of the Episcopal church. The frontier regulators organized resistance to these injustices and confronted Tryon's select militia, which was mostly Presbyterian and Episcopal, at Alamance Battleground, not far from Sandy Creek Baptist Church. Tryon's militia attacked the poorly armed and poorly led Regulators and defeated them. After the battle, Tryon hanged 12 of the Regulators and laid waste to many Baptist plantations in the area. Sandy Creek Seperate Baptist Church dropped from 606 members to 14 within a year of the battle.

The majority of the Sandy Creek refugees fled to Washington County, Tennessee, where they established Buffalo Ridge Baptist Church. Its first pastor was Tidence Lane. Bro. Lane was born near Baltimore, Maryland on August 31, 1724. In early colonial times, his parents moved from Maryland to Virginia and then to North Carolina. In his youth, Tidence was convicted and converted under the ministry of Shubal Stearns, who had been "itinerating" extensively in Virginia and North Carolina, and preaching with wonderful success. It has been written that Stearns was a marvelous preacher for moving the emotions and melting his audience to tears. Most exciting stories have been told about the piercing glance of his eye and the melting tones of his voice, while his appearance was that of a patriarch. Tidence once held "the most hateful feelings toward Baptists," but it was curiosity that led him to make a horseback trip of some forty miles to see and hear Shubal Stearns speak.

"When the fame of Mr. Stearns' preaching reached the Yadkin River, where I lived, I felt a curiosity to go and hear him. Upon my arrival I saw a venerable old man sitting under a peach tree with a book in his hand and the people gathering about him. He fixed his eyes upon me immediately, which made me feel in such a manner as I had never felt before. I turned to quit the place, but could not proceed far. I walked about, Sometimes catching his eyes as I walked. My uneasiness increased and became intolerable. I went up to him, thinking that a salutation and shaking of hands would relieve me, but it happened otherwise. I began to think he had an evil eye and ought to be shunned, but shunning him I could no more effect than a bird can shun the rattlesnake when it fixes its eyes upon it. When he began to preach my perturbations increased, so that nature could no longer support them, and I sank to the ground." Morgan Edwards' unpublished manuscript.)

Tidence Lane was a step-brother to one of Clear Fork Baptist Church's founding members!

Among those who helped start Buffalo Ridge Church in 1779, were the Denton and Crouch families. One of Clear Fork Baptist Church's founding members James Crouch, became a step-brother to Tidence Lane. After James' mother, Sarah, died in 1782, his father, John Crouch, Sr., married Bro. Lane's mother, Elizabeth. Later, James married Agnes Denton. Her brother, Isaac, made a profession of faith at the age of 18and was later called to preach. Just prior to 1800, after land in the western frontier opened up, the Crouch and Denton families migrated to Stockson's Valley, Kentucky, where they helped establish 'the Church of Jesus Christ on Clear Fork Creek'. 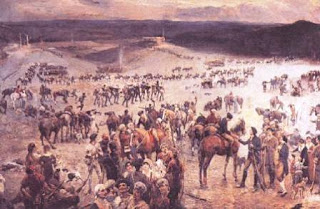 By the way, in 1780, nine years later after moving to Washington County, Tennessee and establishing Buffalo Ridge Baptist Church, many relatives and descendants of those refugees from Sandy Creek became "Overmountain Men," who went over the Blue Ridge Mountains to lead the effort which whipped Patrick Ferguson's British and Tories at the Battle of Kings Mountain. Tidence Lane and nine of his sons fought in that battle. It was a major turning point of the Revolutionary War.

This Thursday, April 2nd, Clear Fork Baptist Church will celebrate her 207th anniversary as a 'Lighthouse in the Wilderness.' Only by the grace of God has the Church been allowed to exist all these years. She has faced many struggles and harships. There have been many trials along the way, but thanks be to God for allowing great men like Shubal Stearns and Tidence Lane to influence a young man, who would end up serving as her pastor for 46 long years. Isaac Denton and his wife are buried near the front entrance to the Church.

For more information about the characters and places included in this story, click on any of the following:


A Reason for Treason is another story I wrote that mentions King's Mountain.