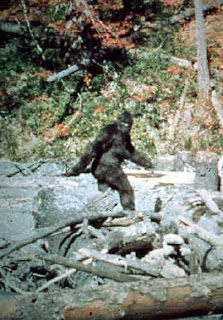 Since the dawn of time, man has been consumed by the unknown....from E.T. to the Loch Ness monster. Now, I am not saying I believe all that mumbo jumbo, but I will admit that I watched King Kong and Godzilla. I even watched The Blob! One thing I do know, or have read, it hasn't always been Area 52, or the scottish highlands, or the empire state building, or Odo Island, Japan that we've looked to for answers. No sir'ee!

For instance, did you know that, according to legend, an old indian burial mound located on the Adair County farm of Harrison Robinson was excavated around the first of January 1858, and was found to contain 'giant human skeletal remains?'

In December of 1953, two Casey County children witnessed a purported 'Bigfoot' digging in the ground a half mile from Green River. It was reportedly pounding a stick into the ground like a spade, and turning over the dirt. The large, dark haired creature started to approach the children, showing it's large, square teeth. It had dark brown hair and long, thick, dirty square fingers and toe nails.

In May of 1957, a child reported became scared by a 'hairy man' standing in her back yard on Wilson Ridge in Casey County.

In the 1960's, a Casey County teenager reported seeing a large,hairy 'thing' looking into the second story window of her home on U.S.127.

About the same time, a hairy 'varmit' was reported near Grove Ridge in Casey County. It was seen a few times and always scared a coon hunter's dogs. Whenever the dogs scented the creature they refused to hunt and actually ran away from the smell.

On January 3rd, 2007,at 4:00 a.m., 20-year-old Chris went to retrieve his deer stand which was 15 feet up a tree in Lazy Acre Estates at Cave City. As he began removing the straps, he was startled by a high-pitched scream. As he remained quietly in the stand, a rotten stench filled the air, so incredibly strong that the man felt nauseous. Then, 25 yards away, he noticed a dark, hairy seven to eight-foot-tall creature, with reddish-brown hair walking upright, swinging its arms in a more dramatical manner than a human would. Its hands swung down around knee level, it had broad shoulders and a bulky body. The witness could not make out any facial details. He said the creature paused a moment directly in front of his location, then proceeded to walk quietly 40-50 yards away from his tree stand. The witness has heard similar screams, over the past couple of years, while hunting on this private property located near Mammoth Cave.

During ther 1970s, James Vincent, hunted for a large, white-haired Bigfoot in the Black Hollow community of Cumberland County. He said the creature left behind 15 inch tracks and a terrible smell. The hunt was apparently unsuccessful.

In 2003, while driving down Highway 92 in McCreary County, a motorist thought he saw a deer approaching the road. The driver slowed down, but as he drew closer, what he saw was not a deer. It was seven-foot-tall, grey-colored 'Bigfoot' with large red eyes, athletically muscular-framed build, large domed head and hairy face. The creature acted as if it was angry. The motorist sped away.

In the late 1960's, a woman in her 20's, saw a large ape-type creature cross Highway 196 near Jabez in Russell County. A man on his way to work also witnessed the encounter.

In August of 1984, two men, on an overnight camping/fishing trip below Cumberland Falls State Park, discovered huge footprints. Where the tracks started, there was a brand new fish stringer still tied up with about eight ready-to-decompose White Perch on it. Someone had left in a hurry. As the men prepared to go to bed the first night, the crickets, frogs and other nighttime noisemakers suddenly grew quiet. Then, the men heard something jump off of a big rock behind their tent and start toward them growling. One of them fired a rifle, which apparently scared the creature from coming all the way into their camp. However, the growling sound continued for the rest of the night. When daylight came, the men saw something big and black walking upright on the rocks way up the river, but they could not make out what it was. Later, they talked about previous trips to the same area when they had noticed a strange smell on a moss-covered rock that stuck out over a small stream, and how the last couple of times, the rock had smelled like a monkey's cage - like something that really smells bad had been laying on it.

Just so my local friends know they aren't being left out...in the fall of 1973, a Clinton County man, whose name I will not use, saw what he said was a six-foot-tall, dark hair-covered creature with an ape-human face and a bushy black tail as it killed one of his animals. He repeatedly fired at the creature from close range to no effect. After many shots the creature at last seemed wounded and ran off on two legs. Two adult creatures and one young one were also seen in area.

And...while walking along a trail near the Lake Cumberland shoreline late on the night of 4, 1999, two people encountered a 'bigfoot' standing by a tree, shaking it forcefully. They watched in shock for long moments, until the creature began to approach them walking upright. They fled to the safety of their nearby cabin. The creature was described as 8 foot tall and covered in brown hair with big eyes.

To learn more about these strange occurances, go to the Kentucky Bigfoot website.