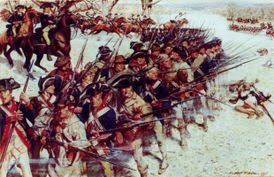 On March 15, 1781, American and British forces clashed near Guilford Courthouse at present-day Greensboro, North Carolina. The battle was the culmination of several months of hard campaigning by the armies of Nathanael Greene and Lord Charles Cornwallis. On the morning of the battle, Greene deployed his army in three lines. The first consisted of nearly 800 North Carolina militia arranged on the edge of a field with “their arms resting on a rail fence.”

One of the militiamen was my 4th great-grandfather.... 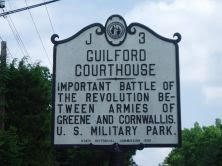 Greene ordered the North Carolina militia to fire two volleys and then fall back. Cornwallis took the bait. His men advanced on Greene’s first line after a thirty-minute artillery barrage by both sides. The British broke through but suffered severe casualties in the advance. One American noted that, after his regiment fired a volley, the British “appeared like the stalks of wheat after the harvest man passed over them with his cradle.” Despite their losses, Cornwallis’s army continued to push against the americans. Unwilling to the risk the destruction of his army, and realizing that he had inflicted massive casualties on the British, Greene withdrew his army to Troublesome Ironworks nearly fifteen miles away. The battered British army did not pursue. Some researches have stated that the experienced ironmaker, Captain Frost, worked at Troublesome Ironworks.

American forces outnumbered British troops almost three to one, and although Cornwallis’s army had held the field, the Americans had punished them severely. One-quarter, or twenty-seven percent, of Cornwallis’s army lay dead or wounded on the battlefield. By comparison, Greene lost only six percent of his force. Cornwallis withdrew to Ramsey's Mill, on the site of the present Lockville Dam, where they encamped for two days caring for the wounded and burying their dead. At Ramsey's Mill, Cornwallis' troops used the rocks of the mill dam to create a bridge over the Deep River, allowing for the army to continue toward Cross Creek. Then, they destroyed the makeshift bridge so Greene's men could not follow. It was a clever trick and a sly way to excape the Americans and hopefully give his troops time to recover from the Battle of Guildford Courthouse. But, fully recover they did not. Five months later, Cornwallis surrendered his army to George Washington, speeding along American victory in the war.

Captain James Frost was born in 1762. He moved from Pennsylvania to North Carolina, where he died in 1808. His son, James Frost, Jr. migrated to Monticello, Kentucky, and was one of Micah Taul's volunteers in the War of 1812. James Jr.'s son, Stuart Corydon "Cord" Frost, fought against the Rebels in the Civil War. His son, Ulysses Simpson 'Grant' Frost, was the father of my grandmother, Vada Frost Boles.