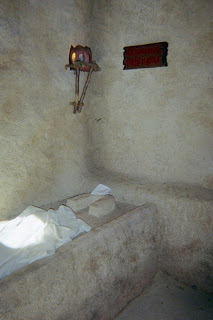 Easter Sunday was a nice day. The cantata seemed to go well. Marina had a little problem with her allergies, so we took time out to tend to her and then afterwards, enjoyed a nice meal at The Lighthouse, thanks to Papa and Nana. Later, Elijah and I went back to Church, where the Lord's Supper was being observed. As they were bringing the grape juice around, Elijah leaned over and said, "Here comes the good stuff!"

It was a simple reminder that, at Easter, we do indeed celebrate "the good stuff" - the resurrection of Jesus Christ.

Growing up, although I know I hunted easter eggs as a toddler, I never really celebrated Easter for anything else other than what it's really all about. When I was five years old, I told my older brother and cousin that the man with the big bag and the red suit was all made up. I'm sure that the following Easter I was shipped off to Siberia or some place for a few days, so I couldn't inflict any further damage. While I was disappointed when I first learned there was no such thing as Santa Claus, I have had several opportunities in my life to never be disappointed in Jesus. There is no charade in Him.

As Elijah so eloquently stated, it is "the good stuff!"