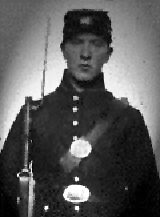 Sarah Rosetta Wakeman was the eldest of nine children when, in the summer of 1862, she posed as a man to get a job as a boatman on the Chenango Canal. Her driving motive was to provide money for her hard-pressed family. When she learned that she could pocket $152 in bounty money by enlisting in the army, she jumped at the chance. At the time, she was 17-years-old. Her regiment, the 153rd New York, served as part of the garrison force in Washington, and was even assigned for a time to guard the Old Capital Prison, while Confederate spy Belle Boyd was incarcerated there.

Wakeman, who used the name ’Lyon,’ during her scheme, had given up on seeing any active duty until February 1864, when her regiment shipped out to Louisiana to take part in the Red River campaign. After surviving the disastrous battle of Pleasant Hill, during which she was under fire for several hours, she was one of many who got sick during the ensuing arduous retreat. Suffering from chronic diarrhea, she was admitted to the regimental hospital and was ultimately sent to the Marine General Hospital in New Orleans. After battling her sickness for almost a month, she died on June 19, 1864, and was buried in a military cemetery.

Incredibly, while she was suffering in the hospital and even after she died, Wakeman was never discovered to be a woman…that is until letters she had wrote home during her military service were discovered in an attic 130 years later, in 1994.