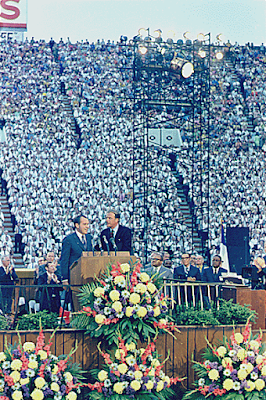 So far, there have been 11 U.S. Presidents in my lifetime, beginning with Eisenhower. I have only seen one of them in person. The date was May 28, 1970. The place was Neyland Stadium on the campus of the University of Tennessee at Knoxville. The event was a Billy Graham crusade.

550,000 people attended the ten day crusade. As many as 500 buses rolled into Knoxville each evening. There was a 5,500-person choir. It was a time of unrest throughout the country. There were protests against the Vietnam war on college campuses, including at Knoxville. 24 days earlier, four students had been shot dead by National Guard troops at Kent State University in Ohio. Suddenly, the war in Vietnam had taken the lives of young U.S. citizens in their own country. Hundreds of colleges reacted angrily to the terrifying news from Ohio. Many campuses closed.

President Richard Nixon was in seclusion at the White House after sending U.S. troops to Cambodia nearly a month earlier. He was needing to break out of the isolation. Since he felt comfortable in the South, and since his popularity here was considered 'stable,' because his wartime policies were heavily favored, he decided the Billy Graham crusade at the University of Tennessee in Knoxville would be a perfect way for him to connect to the people at a time of devastating national tension. Besides, Nixon and Graham were the two most admired men in 1970, so it was a perfect setting for Nixon to come out and be seen and feel safe doing it.

A group from my Church had tickets to the crusade for the night of the 28th of May, and it was only a few hours before we were to leave that we, and the rest of the nation, learned that a last-minute surprise guest at that evening's crusade would be the 37th President of the United States of America, Richard Milhous Nixon. He was going to be the first sitting president ever to speak at a Billy Graham crusade, and I was going to be there to witness it.

In the first days of the crusade, music legends Johnny Cash, Carl Perkins and the Carter Family had been among the special guests. For Billy Graham, the Knoxville crusade was another chance to echo the themes he had pursued in other recently meetings - that the youth of America, hungry for identity and sense of family, could rally around a revolution for Christ. There had been a few protesters mingling outside the stadium handing out antiwar leaflets, but no one had gotten out of line. Little did everyone know that was about to change.

When we arrived at Neyland Stadium, one of the very first things I saw were the protesters chanting antiwar slogans and holding signs that read, "thou shalt not kill." For a 10-year-old boy, it was pretty overwhelming. Back in those days, we only had one hippy in our town. His name was Gus Samaras. You could see him sitting on the sidewalk near Branham Motel just about every day. He had the long hair and the beard, and the holey jeans, and he was always barefoot. I reckon that's how hippies dressed. At Neyland Stadium that night for me, a 10-year-old boy, who judged by what I saw, it was like a whole bunch of Gus Samaras' had shown up. For me, that was pretty wild. Not groovy, just wild.

Soon, a helicopter landed near the stage, and President Nixon and his wife, Pat, exited from it and were led to the platform. It was revealed that President Nixon's chief foreign policy adviser, Dr. Henry Kissenger, was seated near the stage. Also present were presidential advisor H.R. Haldeman, who would later be found guilty of conspiracy and obstruction of justice and imprisoned for his role in the Watergate break-in and subsequent scandal. Nixon's long-time friend, Bebe Rebozo, who became involved in the Watergate crisis when he was investigated for accepting $100,000 on behalf of the Nixon campaign from industrialist Howard Hughes, was also there, along with Nixon's long-time personal secretary, Rosemary Woods, best known for her role in the infamous 18½-minute gap in a secretly recorded audio tape she was making of an Oval Office conversation between Nixon and Haldeman that took place three days after the June 17, 1972 break-in at the Watergate Hotel, and might have shed light on whether Nixon knew about the break-in.

That night on May 28, 1970 at the University of Tennessee's Neyland Stadium in Knoxville, it wasn't Watergate that was on peoples minds. It was the Vietnam War. 75,000 people were in attendance. Just before Graham spoke, some of the 1,500 protesters sang John Lennon's song, "Give Peace A Chance," as they filed out of the stadium. As Graham began his introduction of the president, the 300 or so demonstrators that remained, began chanting, "Politics! Politics! I just stood there staring at them, watching their every move and listening to their every words.

When Nixon came to the podium, the demonstrators began chanting antiwar slogans, only to be drowned out by a roar of pro-Nixon boos. As he began to speak, the protesters began chanting, 'Peace now, peace now!' Someone in the 5,550 choir held up a finger and began chanting, 'One Way! One Way!' Pretty soon the entire choir was doing it. So, you had 'Peace now' on one side, and 'One Way' on the other." When Nixon would speak the protesters would chant. When he was quiet, they were quiet. Finally, singer Ethel Waters walked up to the platform and delivered this message to the protesters, "You chillun there, you hush now! If I was sittin' by you, I'd give you a smack! Then she added, "Then I would hug you and tell you that I loved you." Her sweet spirit seemed to have won out as the protesters quietened considerably.

At the invitation, in a staged event as the Rev. Graham prayed, the protesters stood silently with their heads bowed and one arm extended into the air with two fingers raised in a peace sign gesture.

The crusade ended three nights later. Over 12,000 people came to Christ during that ten-day period event.

For Nixon, his 'night out' in Knoxville was a triumph. Time magazine called his speech the greatest of his presidency. He said, in part, "I'm proud to say that the great majority of America's young people do not approve of violence. The great majority of American young people do approve, as I do, of dissent..." He said, "we can have what can be described as complete cleanliness and yet have a sterile life" without spirituality." 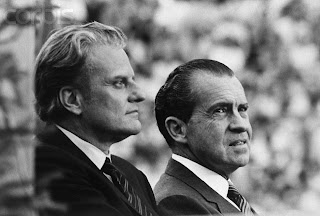