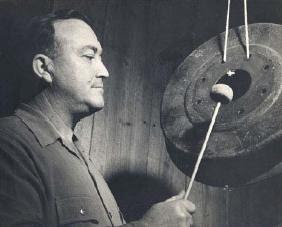 Shape-note singing was formulated in Colonial New England in the 18th century, and kept alive in the rural southern states. Shape note singing uses four syllables, “Fasola,” for the seven notes of the scale and gives each syllable a distinctive note head: a triangle for fa, an oval for sol, a rectangle for la, and a diamond for mi. A seven syllable systemm "Doremi," was later developed.

When I think of shape-note singing, I think of Ruel Thomas. Reual was an important figure in the formative years of John Lair’s Renfro Valley, particularly after the operation moved to Kentucky in 1939. A native of Clinton County, Kentucky, Thomas was an accomplished quartet singer as well as active rural singing school teacher. His expertise in these areas profoundly shaped many aspects of the sacred music programming and events sponsored by Renfro Valley for over fifteen years during the organization’s most successful period. Not only did he lead various quartets that performed on many of Renfro Valley’s network radio programs, but he also organized many monthly singings, singing schools, quartet contests,an annual all-night and all-day sing and more on the grounds of Renfro Valley that served the surrounding local and regional communities of Kentucky.

Born in 1906 near the rural post office of what was then known as Tearcoat in Clinton County, Thomas grew up, is his own words, “under the strict supervision of one of those ‘Do-Re-Me’ singing school teacher fathers.” In 1950, while filling in for John Lair as emcee for the Renfro Valley Gatherin’, Thomas recalled how during his boyhood he was first introduced to the shape-note method that was taught by his father and would later become part of his own livelihood.

"During my first years in the rural school, a boy came home with me one night, and we were trying to pass away a few hours right after supper, before my mom called bedtime. My dad had already gone to his bed. Lying in bed, he suggested we try learning the musical scale in the old fashioned shaped note system. Of course we were looking for something to do, and we said if he would draw the face of the notes we would learn them. The trade was made, and as a result of that one few minutes spent learning the notes, I have learned to sing as well as I have." 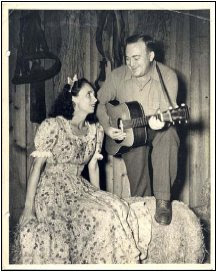 Ruel and Flossie formed The Crusaders quartet in the mid 1930's and the group volunteered to sing for free on the Renfro Valley Barn Dance. Bass singer Morris Gaskins said they volunteered because of the broad coverage the group would get over the powerful WLW radio station in Cincinnati, which broadcast the Renfro Valley shows at the time. Later, Thomas changed the name of the group to the Seventy Six Quartet, in honor of the community he grew up in, and the group eventually began to be heard over the airwaves of WHAS in Louisville, when that CBS affiliate began carrying the Renfro Valley broadcasts. CBS was ready to turn the weekly broadcast a fifteen-minute daily program, but suddenly, in 1955, General Foods Corporation dropped its sponsorship of the program. It was a devastating blow. The program would have been heard by between five and seven million listeners each week in practically every state in the union. Sadly, this pretty much signaled the end of the Seventy Six Quartet, and eventually an end of the Thomas' public singing careers. Ruel died on Easter Sunday 1958, and Flossie was killed in a car accident four years later.

Old Rugged Cross/Give The World A Smile - Click to download this medley of songs that features bass singer Morris Gaskins. (From the Renfro Balley Gatherin' broadcast on WHAS around 1949.)

Ruel Thomas maintained an active schedule as a singing school teacher throughout his time at Renfro Valley. His shape-note style proved to be a perfect fit for owner John Lair's tapestry of “the valley where time stands still.” On August 5, 1940, Lair introduced Ruel Thomas and his Crusaders Quartet this way...

"I noticed some folks just coming in… It’s part of the choir from over at Seventy Six, Kentucky, and I know they’re gonna sing a song for us, and it’s going to remind me of the kind of singing we used to do right here in Redbud Schoolhouse on Sunday. As they sing, I’m going to sit here and look back over the years and see myself and lots of you other folks here, barefooted kids, sitting here on split log benches attending regular Sunday services in the old log schoolhouse, which served as a church house on Sunday, and I’m going to live over, for just a minute, a part of my life I’ll never forget. Some night we will have a regular old-fashioned singing school here in the school house and we’ll sing just about everything in the book."

Eventually, Thomas brought his singing school classes and choirs to the Renfro Valley stage, including a 1943 performance of the Ottawa, Kentucky Baptist Church Choir singing on the Sunday Morning Gatherin','with Lair emphasizing that the choir “sang from shape notes in the old-time way.” In 1948, Lair presented another one of Thomas’s singing school classes on the Gatherin’. The performance, which survives on a radio transcription disc in the Berea College Sound Archive, features the Cedar Springs Baptist Church from Casey County, Kentucky. (Click the link to download the song.)

In addition to the benefits Lair received by Thomas’s singing school activities, Thomas no doubt gained as well from the association. His exposure at Renfro Valley surely assisted him in filling up his schedule with teaching engagements, and the performance opportunities he could offer his classes was both good motivation for his students and a nice showcase for his work. One example of such mutual advantage was a singing school sponsored by Renfro Valley in July, 1948. Organized by Thomas, the three-week school brought in instructors that were “among the South’s best” and taught various instruments and even piano repair as well as singing. People from afar came to participate, with one group from Wayne County, Kentucky, traveling one hundred and twenty miles each night. With the conclusion of the singing school coinciding with the All-Day Sing, Lair featured Thomas’ student choirs on that mornings Gatherin’ broadcast as well as the broadcasted portion of the afternoon sing.

Thomas' involvement with local gospel singing seems to have only increased in the late 40s and early 50s. During the summer of 1949, he held monthly sings at Renfro Valley’s big barn, and in the early fifties he would publish announcements of local singings taking place in various area churches and communities in his Bugle columns. In August of 1950, he filled in as emcee for the Gatherin’ and used the opportunity to bring in four different quartets from the local area as guests. In addition, his singing school teaching seems to have been as active as ever, with him announcing several engagements in the Bugle during the summers of 1953 and 1954.

Thomas’ swan song with Renfro Valley came in 1956, when Lair asked him to be a part of the special Renfro Valley Folks television series being sponsored by Pillsbury Mills, Inc. The third of thirteen shows completely focused on documenting one of Thomas’ singing schools in action. This was Thomas’ last large-scale involvement with Renfro Valley, a fitting conclusion to his long association with the establishment as its local “old-fashioned music teacher.”