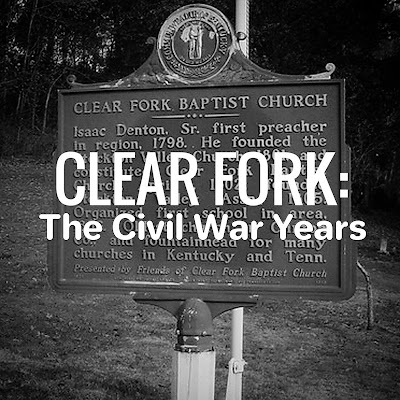 "There being a war broke out in our government and dissention amongst the people, the Association never met and the church is doing no business and seldom met." - James Harvey Wood, Clear Fork Baptist Church Clerk, August 24, 1861.

During the Civil War years, 1861 to 1865, the members of my church, Clear Fork, rarely met. Business meetings were held only three times in 1861. On July 27th, clerk James Harvey Wood wrote: "At the time of the July meeting there was no business done because of a 'publick' speaking at town."

That event was a Union-sponsored rally led by 6th Judicial District Judge Thomas Bramlette, a Clinton County native who, during the Civil War, served as colonel of the 3rd Kentucky Regiment Infantry, leading his regiment in the Siege of Corinth and the Battles of Shiloh, Perryville, and Stones River, then resigning his military commission in 1862 to serve as U.S. district attorney before being elected governor on August 3, 1863 and guiding the state through the latter part of the Civil War and the onset of Reconstruction.

Literally hundreds of people showed up for the rally on the 27th, as testified to in Captain John W. Tuttle's Civil War diary. "We arrived at Albany about 10. The first thing we saw upon arriving at the top of the hill overlooking the town were the Stars and Stripes gaily fluttering to the breeze above the tops of the houses. On entering town we met a procession with 34 ladies in front on horseback, one of whom carried a National Banner followed by about 60 cavalry and 500 infantry. They presented quite an imposing appearance. About two thousand persons were in town. After dinner a procession was formed which marched out about a half a mile from town where they were addressed by the Hon. Thos. E. Bramlette in a speech of something more than three hours duration. He made a most thrilling appeal in behalf of the Union and called upon the loyal citizens of Clinton County to join a regiment he is raising for the purpose of aiding the Union men of East Tennessee."

Tuttle, who was from Wayne County, served in Company H of Col. Bramlette's division. In his diary he goes on to write: "About 30 enlisted in the service under him and 87 cavalry, to compose a part of a regiment destined for the same service, now being raised by Frank Woolford of Casey County. The feeling for the Union here is very strong and the most intense enthusiasm prevails. A Secessionist is not allowed to open his mouth. The people of this county are apprehensive of an invasion by Tennesseans. They have picket guards stationed out at every pass. The alarm was spread about an hour by sun yesterday evening, and from three to five hundred armed men gathered from various parts of the county and stayed in town last night."

And so the war began. Back at Clear Fork, a month later, in August, clerk Wood made this entry in the church minutes: "There being a war broke out in our government and dissention amongst the people, the Association never met and the church is doing no business and seldom met." The church did meet once in 1862, but ten months later Wood noted: "Up to March of 1863 the Church is doing nothing." No minutes were recorded during the remainder of 1863 or in all of 1864.

The next entry in the church minutes came on June 24, 1865, two months after the Battle of Appomattox Courthouse and the surrender of Confederate General Robert E. Lee, which set the stage for the end of the war. "The Church having for a long time been deprived of meeting together on account of the war," Wood wrote, "met at the schoolhouse on Clearfork.

The reason for meeting at the school is because sometime during the year 1864 Clear Fork Baptist Church became a direct victim of the Civil War when Confederate guerillas burned the meeting house to the ground. Luckily, the church's business meeting records from it's organization up to the Civil War had been kept in the clerk's homes. Clinton County's courthouse also burned, it is thought, on the same day as the church. "Guerillas believed that destroying places like churches and courthouses, where records were kept, helped add to the disorder of the war," writes historian Tim Talbott at explorekyhistory.ky.gov. Although he wasn't a member of Clear Fork, Confederate guerilla Champ Ferguson, who was born and raised in Clinton County, did attend services there with members of his family.

In his book, "A Lighthouse in the Wilderness," former Clear Fork pastor Morris Gaskins wrote that after the war church members not only met at Clear Fork School, but in other school houses and even other church houses in communities across the county for the convenience of it's members who lived in the different communities, and the good news is there was a season of revival. In 1866, for example, ninety-seven new additions were added to the church, most on professions of faith. The greatest of the meetings that were held while Clear Fork was without a meeting house took place at Beech Bottom, before that church was constituted, and at Locust Grove. Revival was spontaneous, usually starting with the regular monthly meeting when several people would respond, and continuing for eight to ten days.

Clear Fork church was no stranger to religious upheaval. First pastor Isaac Denton arrived at Spring Creek between 1798 and 1799 just as the Second Great Awakening was getting underway. Soon, he brought the early settlers together and began preaching to them. The meetings were directly responsible for the organizing the church on April 1, 1802. The Denton family was also no stranger to religious upheaval as they had experienced the First Great Awakening in the mid 1700's at Sandy Creek, North Carolina with the great preacher Shubal Stearns.

Following the wars end, Clear Fork Baptist Church continued to meet in other church houses and school houses until July of 1869 when members voted to build a new church. As for the courthouse, it was rebuilt in the 1870's. Historical Marker #597 on the courthouse lawn in Albany notes the burning of the courthouse by guerrillas during the Civil War.