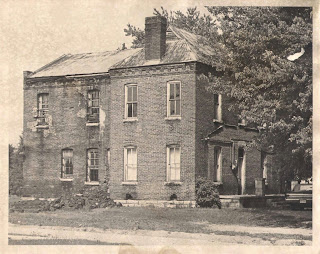 On April 9, 1954, a man escaped from the second floor of the jail at Albany, Kentucky by sawing through the latch on his cell door and then, removing several bricks from the back wall of the jail, dropped to the ground using a rope made of blankets. Jail officials were given a clue that their prisoner might try to escape when, hours earlier, they confiscated two saws, 56 saw blades, brace and bits, a screwdriver, oil, putty, a rope and other tools from the prisoners cell. They apparently overlooked the fact that the man had been sawing on the latch and had camouflaged it with putty. He was being held on default of an $8,000 bond.

On Gilligan's Island, the professor could do just about anything. He went on the three-hour cruise to write a book about ferns but he brought along enough books to last a year or longer. But, in those books were solutions for every single problem the castaways encountered. He thought up all the plans to get the castaways out of danger from island invaders. He could hypnotize the Skipper. He produced electric power for phonographs or washing machines by having Gilligan or the Skipper manually pedal, or turn a pulley, which the Professor engineered. He even invented a way to recharge the batteries in the radio using coconuts and bamboo. The only thing he could never do was fix a two-foot hole in the boat. RIP Russell Johnson. Thanks for all you did to bring comfort to your fellow shipmates, and for all the laughs you gave those of us who were watching from 'a thousand miles away.' You did something that every boy in the world wanted to do...you kissed Ginger. Way to go, dude!
at June 02, 2014 No comments: