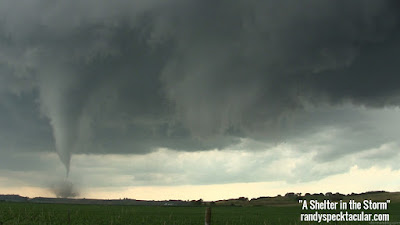 The Farmer and the Bicycle 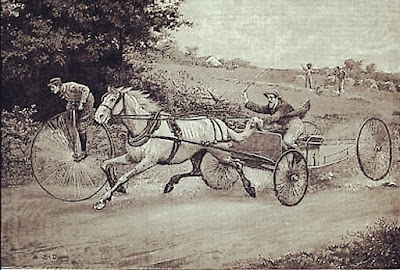 Old farmer Jacob Rust lived about four miles from Albany, said a letter to the New York Sun. He had a good mountain farm and was very well-to-do in a rough and thinly populated region where a man with $10,000 was considered rich. Farmer Rust had several daughters and Ellen, the oldest, was considered the most 'handsomest' of them all.

This particular summer, a young man named Henry Curtis from Ohio, whose parents had moved there from Albany, had gone back to visit his relatives. He brought with him a bicycle. It was the first one to be seen in Clinton County, the letter said, and people came from miles around to see it. Henry, it said, was an expert rider and frequently displayed his bicycleship before the eyes of the mountaineers. He was even kind enough to let a number of the young men try his "velocipede," as it was called in Albany, but their bruised faces and sore joints soon made them very shy of the machine.

Henry fell in love with Ellen Rust. He pressed his courtship and was accepted, but farmer Rust was opposed. He objected to Henry because, as far as the farmer's knowledge went, he did not technically have what was known as any visible means of subsistence, or has farmer Rust termed it, "he was a lazy good-for-nothin' who had nothin' to do but go gallopin' around the hills on two wheels." Henry assured him he had a good business and fine prospects in Ohio, which was later transpired that his statement was true, but the farmer did not believe him.

So, Henry and Ellen waited. She was of legal age and they could have easily eloped, but they did not wish to do that. They wanted the old man's consent. The bicycle appeared to be farmer Rust's chief objection. He did not believe in it. "My gal," he said, "shan't marry any fellow who fools away his time on such a derned thing as that. Why, he might break his neck any day and then I'd have his 'widder' to take care of. I don't want for a son-in-law any man who rides on a velocipede. If he had a horse or a buckboard it would be all right."

Henry would not put away his beloved machine. The letter stated that he loved that bicycle, next to Ellen of course, and he meant to have them both. On Monday, Ellen was visiting a relative in town and Henry went to see her. They were getting angry at the old man's obduracy. "I will ride right out now, see him, and ask for your hand," said Henry, "and if he does not consent I will come back and we will get married anyhow. You are of legal age and we can have the ceremony performed here in town."

Henry mounted his bicycle and headed for farmer Rust's place. The old man had just come in from a journey and his horse and buckboard were still at the yard gate. The young man immediately made known his errand.

" I told you once before that you could not marry her," said the farmer.

"Well, I am going to marry her, anyhow," replied Henry. "She is in town now. I am going back there and in less than an hour she will be my wife!"

"Then you will have to beat me to town," said farmer Rust. "I don't think any velocipede can get ahead of my old mare and the buckboard. If you get there ahead of me, i guess you can have the girl."

With that said, Henry mounted the bicycle and the old man jumped on his buckboard and the race was on. On a good turnpike or level road, read the letter, Henry could have easily outdistanced the old mare, who was not as swift as she once was, but it was altogether a different matter over those hills. But his recent experience with such difficulties stood him in good service, and, in spite of his rough path, Henry soon had the satisfaction of passing the farmer's bumping buckboard.

Henry waved his hand gleefully at his perspective father-in-law, who was swearing at his old mare and endeavoring to whip her into a faster gait. He wrecked twice, but each time Henry was able to right himself and his wheel without harm to either, and passed into town a quarter of a mile ahead of farmer Rust. He then stopped and waited for the farmer to come up.

The farmer looked at the bicycle for a moment and then exclaimed, "Well, I'll be derned!" Together, they went to fetch the Baptist preacher, brought him to the house where Ellen was visiting relatives, and it was there, on that day, that she and Henry were married.