The Behind Here Person

On this date, April 19, 2009, it was opening day for little league baseball. It was a warm Saturday. Lots of people were there and the smell of hotdogs cooking on the grill permeated the air. Chrissy, my neice, had a t-ball game that day. Her team took the field first and Chrissy's position was hind catcher. When the other teams' coach walked up to the plate with his first batter, Chrissy introduced herself as, "I'm The Behind Here Person!" 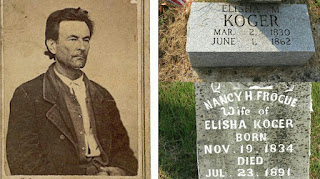 Mrs. Henry Hargis, wife of a well known farmer living near Somerset, was literally frightened to death by a snake. Mrs. Hargis had taken a jug of water to her husband, who was working in the fields, and was returning to the house when she felt something pulling at her dress from behind, but thinking it only a briar she gave her skirt a flounce to free herself. Instead of a briar there was an enormous copperhead snake attached to it. This snake was killed by Mr. Hargis and on examination it was found that Mrs. Hargis had not been bitten by it. She was so terribly frightened however, that she fell in a faint, followed by delirium, and never regained consciousness, dying in great agony thinking the reptile was still clinging to her and begging piteously to those about her to take it off.