"Bear up all you can, the hardest stroke falls to me..." John Mulkey Reneau was born in Clinton County, KY on June 25, 1844. The son of Rev. Isaac Tipton Reneau, John married Eleanor Ann "Nelly" Means, daughter of my 3rd great-grandparents, Azel and Susan Wright Means, on January 10, 1867.

A few hours after his wife's death, John wrote the following to his father:

"Dearest Father:
It falls to my lot to record to you the death of my loving companion and your affectionate daughter, Nelly. She died about sunrise this morning, praising her God and maker. She was not delivered. She flooded to death. I would be proud if you could be here, but you could not get here in time, and I thought you would not wish to be gone so long and know nothing about it. Bear up all you can, the hardest stroke falls to me, my little motherless babes, for whom I crave your earnest prayers.

Of their children, Alice never married. In 1920, at age 47, she was living in Union County, New Mexico with her brother, Azel. Susan married Dr. Richard Claborn of Clinton County in 1890. They moved to Knox County, Texas.

On April 6, 1910, at age 65, John Mulkey Reneau died at his home in the Huntersville community after an illness of just three weeks. Mary died four months later.

(John Mulkey's sister, Mariba, is the great, great grandmother of actor Johnny Depp, who was born in Owensboro, Ky in 1963.)

It was not always known as Ronnie's Apple Cake. Originally, it was simply known as the delicious apple cake that mom baked. We all loved it, but Ronnie, my brother, loved it the most and let it be known that it was his favorite dessert. Only later did that matter, because that apple cake would be the very last food item of moms that  Ronnie would ever eat. It was on the late afternoon of May 6, 1981. He died the following morning in a car accident just five-tenths of a mile from home. Not long after that, mom announced that she could no longer bare to bake another apple cake again and that was the end of it. We understood.

President Dwight David Eisenhower once said, "There's no tragedy in life like the death of a child. Things never get back to the way they were." But, one day, 30 years after my brother's death, one memory did come back. It was Sunday, Thanksgiving Day week. J.D. and I had driven to mom's house for lunch. I wasn't expecting to see that apple cake sitting there on the food bar that day, but there it was. Naturally, a ton of memories came flooding back. I never expected things to remain the same after Ronnie's death, but who would? I'm not real sure when exactly it happened, but somehow, over the years, I had found a place in my mind to store the memory of him and those days, and eventually had won the struggle to go on with my life.

I suppose the same thing could be said for mom. Standing there, staring down at the apple cake I said to mom, "Wow, you baked that apple cake!" She said that she had found the recipe in her box, but did not know why she had not baked it. I reminded her how much he loved it and would always say he it was his favorite dessert. It was on that day that I renamed mom's apple cake, 'Ronnie's Apple Cake.'

For those of you who are curious as to why my brother loved that apple cake so much, here is mom's recipe. I hope you will enjoy it as much as he did.

Instructions:
Using a baking pan, bake at 350 degrees for 45 minutes to one hour. 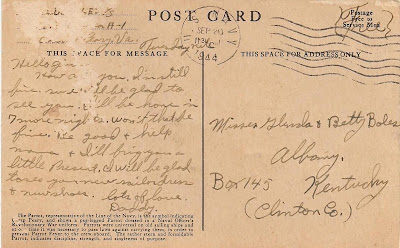 The postcard, dated September 20, 1944, was sent by my grandfather to his daughters while he was stationed at Camp Peary, near Williamsburg, Virginia.

As you see in the photo, he indeed came home and got to see his daughter's in their new sailor dresses and new shoes... 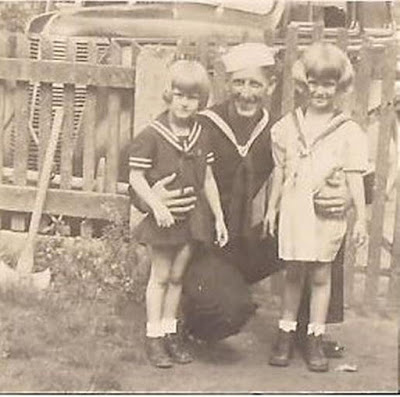 Everybody, Somebody, Anybody and Nobody

"This is a story about four people named Everybody, Somebody, Anybody, and Nobody.

There was an important job to be done and Everybody was sure that Somebody would do it.

Anybody could have done it, but Nobody did it.

Somebody got angry about that because it was Everybody's job.

Everybody thought that Anybody could do it, but Nobody realized that Everybody wouldn't do it.

It ended up that Everybody blamed Somebody when Nobody did what Anybody could have done."

Email ThisBlogThis!Share to TwitterShare to FacebookShare to Pinterest
Labels: Anybody, Everybody, Nobody, Somebody
Newer Posts Older Posts Home
Subscribe to: Posts (Atom)