Micajah Bunch - King of the Melungeons 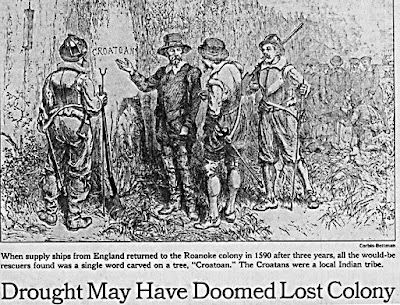 The Roanoke Colony was an enterprise financed and organized by Sir Walter Raleigh in the late 16th century to establish a permanent English settlement in the Virginia Colony. In 1585, during his West Indian Voyage, Sir Francis Drake began attacking Spanish colonies in the Atlantic so that he could supply Raleigh's colony with additional supplies and people -- the slaves he had captured. But, 10 days after Drake's ship arrived, there arose a hurricane and the 500 slaves had to be freed to save the ships. It is believed the captured slaves mixed with members from the colony at Roanoke and all were eventually absorbed into the surrounding native american tribes. By the time the census came around, all of the people were gone. The ordeal became known as the lost colony.

In the mid 1700's, several families lived together, migrating from area to area in the backwoods deep in the heart of appalachia, incuding the Newman Ridge and Blackwater areas in Virginia and East Tennessee, then later moving to Orange County, North Carolina and onto to the Clinch River area near a portion of Hawkins County that is now in Hancock County, Tennessee. They were known as Melungeons, or Molatas, a mysterious group of people who had swarthy complexions, straight black hair, black or gray eyes. They were considered neither white, black, nor Indian, but free people of color; people of a mixed race. Melungeons believed themselves to be of Cherokee and Portuguese extraction. Most also believe they descended from the lost colony.

During the American Revolution, the term Tory was used to describe loyalists...colonists who sided with Great Britian against the revolutionaries. In 1781, Captain William Thomas Riddle, a reckless North Carolina Tory leader, and a Melungeon, captured two soldiers commanded by Colnel Benjamin Cleveland of the Wilkes County Militia. The prisoners were given the choice of taking the oath of allegiance to Great Britan and joining the Tory band or being shot as traitors to the Crown. They took the oath but quickly made their way to militia leaders and gave them Riddle's location. Riddle was captured, court martialed and hung.

The place where Riddle was hung.

The Melungeons called their leaders "King" instead of "Chief." Micajah Bunch was the King of the Blackwater Melungeonites. Born in 1733 near where the Saponi tribe lived, King Micajah was part Melungeon and part Cherokee. He is believed to be the first melungeon to be in the Newman Ridge area. Captain Riddle's wife, Happy, had been seen riding with the tory gang and she had been spotted slipping into town to watch her husbands execution. Fearing for her life, King Micajah and the other Melungeons fled to the Clinch River area in Tennessee. Eventually, Happy died and when she did, the others decided to move on. Destination, at least for one: Stockton's Valley. 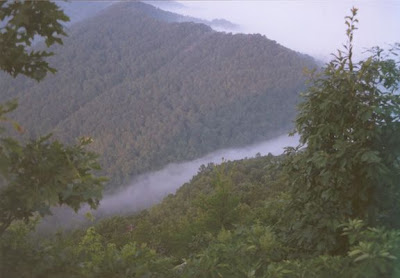 The year was 1798. King Micajah Bunch was among the first settlers to arrive at Stockton's Valley. His name is on the 1798 tax roll for Cumberland County, Kentucky. Thomas Stockton had been the first to arrive in 1797, followed by the George Smith family and then the family of William Wood, which contained several sons who had fought proudly for America's freedom. Some believe that William Riddle started out fighting for the same cause but had become estranged and switched sides. Either way, Stockton's Valley may not have been the best place for King Micajah to be, considering he was alleged to have been a part of William Riddle's Tory gang. While Micajah Bunch is listed on the Cumberland County tax rolls for 1798, he is not on the 1804 list. I can't find him anywhere after 1798.

For a short time, Valentine Collins, a melungeon, lived at Stockton's Valley, Kentucky and worshipped as a member of Clear Fork Baptist Church. Sometime after 1803, he and his wife, Dicey, left their home on Newman Ridge and migrated west. In September of 1806, Valentine was received under the watchcare of Clear Fork Baptist Church. Apparently, an issue arose regarding his previous church membership. The minutes of Stoney Creek Baptist Church show he and Dicey were members there from December of 1801 through April 23, 1803. It could be that he was unable to show proof. In March of 1807, Clear Fork's clerk, William Wood, wrote there was a contradiction as to where Valentine's membership was previously. In July, Wood wrote that Collins was a transient member, meaning he was only passing through. In September, Clear Fork declared non-fellowship with Collins after he neglected to address the issue. That was the last reference to Valentine Collins at Clear Fork.