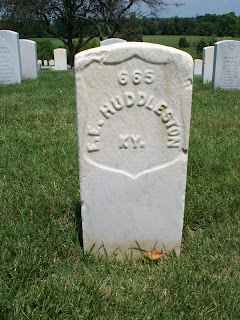 At his Nashville trial, one of the 53 deaths listed in the indictment against Champ Ferguson was that of Union guerilla Elam Huddleston. If there was one Unionist who was a thorn in Ferguson's side, other than Tinker Dave Beaty, it was Elam Huddleston.

The bad blood between them started before the war. Allegedly, Ferguson had been swindled by some Fentress County, Tennessee men in a business transaction involving hogs. Even though Ferguson received a judgement in his favor, his brother, Jim, and another man took a horse belonging to one of the Fentress County men, Alexander Evans, as attachment to the debt. Unaware of this, Champ went to a camp meeting near the Lick River in Fentress County and there was beset upon by a group of men that included Elam Huddleston. Ferguson physically fought off these men, cutting one of them with a knife. Huddleston vowed to kill Champ, who turned himself in to avoid that. On October 28, 1862, Champ and his men ran into Elam and his men near the town of Albany, and the gun battle that ensued is probably the biggest skirmish that occurred during the civil war in Clinton County. Both men escaped death that day.

Champ Ferguson, along with some of John Hunt Morgan's men, had caught up with Elam Huddleston at a log house in Adair County. The home was under construction. It had no floor upstairs, but a few plank on the joists. Huddleston was upstairs shooting out of a window upstairs, when someone ordered the house burned. Someone inside doused the fire with water about the time that Huddleston was shot. He was believed killed as he fell between the joists and dropped to the ground floor. He was brought outside where Ferguson put another bullet in him.

Just before Champ Ferguson was executed, the commandant, Colonel Shafter, read the charges and specifications together with the sentence of the Court. As the different charges were read he either bowed in acknowledgement or shook his head in denial of them. When the name Elam Huddleston was read, he shook his head, and remarked that he could tell it better than that. During the trial, Ferguson said this about Elam Huddleston's death: "I did not kill Elam. I was along, however, I think Ab. Hildreth shot him. I know that Elam shot at me, and the ball grazed my clothes."

According to J.A. Brents' book, Elam Huddleston was five feet ten inches tall, had light hair, blue eyes, and fair skin. He was a man of good sense, was true to his country and was as brave as any man that ever breathed.

Huddleston enlisted in the 1st regiment of Kentucky cavalry, commanded by Colonel Frank Wolford. He was a private in company C.

On January 19, 1862, he took part in the battle of Mill Springs. The Union pickets were attacked at daylight, and twenty mounted men were immediately sent to their support. Elam Huddleston was one of the twenty. When they arrived, the Union pickets were confronted by an entire regiment of infantry. The pickets took a strong position, and received the attack of the rebel regiment. The latter however were held in check until other forces formed and marched to the scene of action, a distance of half a mile. It was however with considerable loss in killed and wounded. The pickets stood firm until their foes were nearly upon them, when all retired except Elam Huddleston, who remained until he was nearly surrounded, when, throwing himself flat upon his horse, he galloped to the rear without any injury. Before his return, his brother Ambrose said to an officer that Elam had acted very foolishly; that he had remained until he was surrounded, and was then killed. Elam, upon his return, reported that he saw four men fall, one he believed to be a commissioned officer. After the battle the ground was examined, and one captain and three privates were found to have been slain. Huddleston took his horse to the rear, and returned and did good service on foot. After the battle, he pointed out a spot upon which he said he had shot several of the enemy. The ground was examined, and the bodies of one commissioned officer, and ten privates were found.