The Pace Of Life

I am not a fan of cold snowy weather but I have to admit this "slowing down" of life and activities this week because of the snow is kind of nice. Nothing's wrong with doing it every now and then. It has been a while since we have experienced a "slow down" such as this. Sometimes we need to take a little break and just breathe, spend quality time with family, catch up on projects, read a book, etc.

With school out and many businesses closed, our local county cooperative extension service held a Snow Day photo contest, which resulted in some amazing photographs of the snow and the beautiful countryside where I live. It has been refreshing, to say the least (click here). If it takes an act of mother nature to make us see that there is more to life than the normal hustle and bustle routine, then so be it. A few days away from that isn't going to hurt us at all.

The way the weather has brought things to a halt, or near that, this week has reminded me of one of the more famous episodes of the Andy Griffith Show. "Man in a Hurry" first aired on January 14, 1963 (season three, episode 16). In that episode, Robert Emhardt plays Malcolm Tucker, a motorist who becomes frustrated with Mayberry's simple, relaxed ways. His car breaks down on the outskirts of town and he hopes to have it repaired in time to attend his meeting in Charlotte the next morning. Unfortunately, it's Sunday and Wally the mechanic refuses to do it. Finally, Gomer agrees to have a look at it, but not before Mr. Tucker learns a valuable lesson about the pace of life.

After spending the day with Andy at his home, Mr. Tucker begins to re-assess his values and priorities. It is a lesson we all can learn from. Even though we all have things we need to get back to, and we will soon enough, take a moment to slow down and enjoy life. 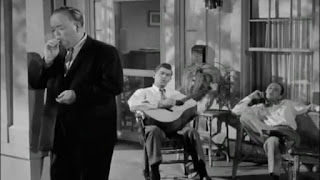