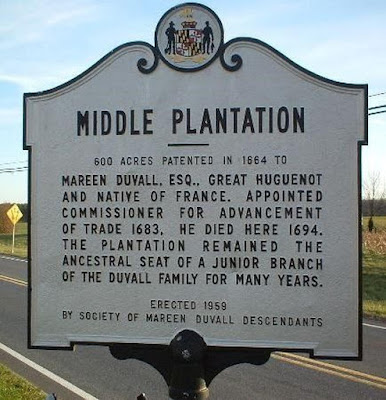 Mareen DuVal was a French Protestant, a Huguenot, who fled his homeland, Nantes, France, sometime around 1650 to escape religious persecution from the Catholics and the French Crown. After a stay in England, he arrived in Maryland on August 28, 1650. There, he became quite prosperous. His estates in Davidsonville, Maryland and La Val were as luxurious and courtly as any of the manors of the English gentry.

Before his death in 1694, Duvall had purchased sizeable tracts of land, including  Catton, later known as Belair, as well as owning Middle Plantation in Davidsonville, Maryland. Combined, he owned several thousand acres in Anne Arundel and Prince George's Counties.

"No more striking figure in colonial history is found than the personal achievements of this fleeing immigrant. He came as one of the one hundred and fifty adventurers, brought over by Colonel William Burgess. He settled in Anne Arundel County and became one of the most successful merchants and planters of that section." - J.D. Warfield wrote in The Founders of Anne Arundel and Howard Counties, Maryland.

He is also my 9th great-grandfather and here is my line: