William Devin was born in Dublin, Ireland and came to America around 1745. He and his wife, Sarah, settled along Banister River in what is now Pittsylvania County, Virginia, near present-day Danville and Martinsville. Their son, Alexander, my 6th great-grandfather in my grandmother Dimple Means Speck's line, was born there on March 22, 1769.

Alexander was a Baptist preacher who was raised in South Carolina, preaching the gospel up and down the Pee Dee River (the original river in Stephen Foster's song, "Old Folks at Home.") It is written that he was a strong doctrinal preacher, a man of fine talents who exerted a strong influence on society. The "History of the South Carolina Baptist," by Leath Townsend, states that Devin helped John Hightower and Joseph Logan organize several churches there in the early to mid 1790's before migrating west to Kentucky in 1798.

According to J. H. Spencer's "History of Kentucky Baptists, Vol. 1," The Kentucky Legislature had passed an act in 1795, by which a preemption right to two hundred acres of land was secured to each settler in the Green River country. This induced a large influx of immigrants from the southeast to settle in that region. Most of the early settlers along the southern border of the State were from the Carolinas. A settlement by people from these states was made on the waters of Drake's Creek, in what are now Allen and Warren counties, as early as 1795. Among these, according to Spencer, were "a number of Baptists, including Hightower, Devin and Logan." 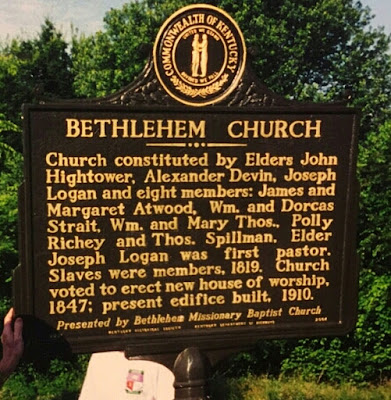 They organized Union Church near the West Fork of Drake's Creek in Warren County. Today, Old Union Missionary Baptist Church is considered to be the oldest, continuous congregation in Warren County, having been constituted in 1795.

Sulphur Springs Church was founded by the three preachers around 1797 or 1798. It was the first church of any denomination in Allen County.

They constituted Bethlehem Church (originally called Upper Difficult Church) in 1801. Logan was the first pastor, Hightower the second and Devin the third. Today, it is the oldest existing church in Allen County. These three ministers worked both together and separately throughout the region. There is a record of Devin and Hightower dedicating The Baptist Church of Jesus Christ in Smith County, Tennessee in 1802.

In his book, Spencer referred to Hightower, Logan and Devin as “the master builders” of Baptist churches who often taking turns serving the pulpit in churches they helped constitute. 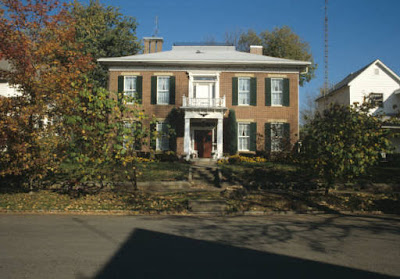 (Alexander Devin House, 412 West State Street, Princeton, Indiana) )
Devin moved his family to the Indiana Territory in the spring of 1808. He was one of the first Baptist preachers in Southwestern Indiana. He bought the first lot sold in Princeton. Alexander and his son, Joseph, operated a pork packing and shipping business. They had large packing houses and ran an extensive business for many years, loading pork in flatboats and sending them down the river to New Orleans.

Alexander was one of three Gibson County, Indiana men who were delegates to the Indiana Constitutional Convention in 1816. The other two were David Robb and James Smith. In all, forty-three delegates from 13 counties across the southern part of the state met in Corydon (the original state capital) to vote whether or not Indiana should be declared a state. The vote passed 34-8 and Indiana became the 19th state on December 11th of that year. During Indiana's bicentennial celebration in 2016, all 43 delegates were honored. Devin’s stone at Warnock Cemetery was re-set before the ceremony took place.

After moving to the Indiana territory, Devin continued organizing churches. He collected the first churches of the Wabash Association, which was formed from five churches in 1809. He also organized Providence Church in 1822 and Harvey's Creek Church in 1823.

Alexander and his wife, Susan Nowlin, whom he married in 1793, had thirteen children. Alexander died on January 3, 1827 and is buried at Warnock Cemetery in Gibson County, along with his wife and most of their children. 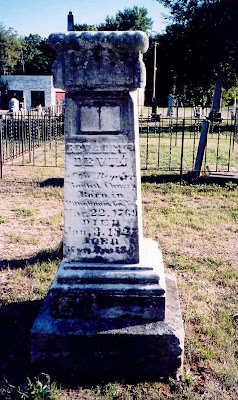