"An Unsung Hero in the making of a Legend" 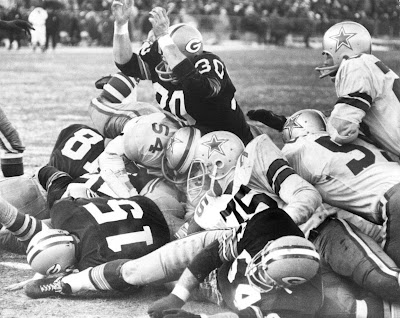 Legendary Green Bay Packers quarterback Bart Starr died Sunday at the age of 85. He had been in failing health since suffering two strokes and a heart attack in 2014. Starr played for the Packers from 1956 to 1971 and won five NFL championships. He was the most valuable player in the first two Super Bowls.

Before playing in the first one on Jan. 15, 1967, the Packers first had to get by a tough Dallas Cowboys team in the NFC Championship on Dec. 31, 1967. When I think of Bart Start, this is what I think of:

The now legendary 1967 NFC Championship, dubbed the “Ice Bowl,” was known not only for the artic conditions (-41 degree wind chill factor) but for the final play by the Packers. It was the 4th quarter, the Cowboys were leading 17-14 with just 16 seconds left in the game and the Packers were at the one yard line. Starr, the quarterback, asked offensive lineman Jerry Kramer if he could make a hole in the line for him to get through for the touchdown. Kramer answered yes. The ball was snapped and true to his word, Kramer, the right guard, blocked for Starr, who crossed over into the end zone as the photo shows for the game winning touch down. The crowd went wild. Pandemonium followed as both fans and players swarmed the field. Starr was lifted high into the air as the crowd chanted STARR! STARR! STARR! over and over.

After he made the successful block, Kramer wound up face down on the icy field. As he picked himself up, he stared down the field at the sight of the famous Starr being in exalted for making the touchdown. Although happy his team had won, Kramer felt dejected, overlooked for his great contribution to his teams victory. Sure, Starr had ran in the touchdown, but if not for Kramer, the quarterback would have never been able to make it. And then, Jerry’s eyes turned away from the celebration and they found his head coach, Vince Lombardi, who was still standing on the same sideline where his team had stood during the game. Lombardi was standing still, his eyes steadfastly staring straight at Kramer. The second their eyes met, Lombardi extended out his arm and gave Kramer a thumb’s up. At that moment the lineman knew that, even though his role in the victory had gone unnoticed by the crowd, his head coach knew the truth, and that made everything okay.

Incidently, prior to Kramer's 2018 induction into the Pro Football Hall of Fame, the selection committee received a letter of recommendation on behalf of Bart Starr from his wife, Cherry. It said, in part, “Bart has always believed Jerry was the total package for a quality football player.”

Yesterday, ESPN wrote that Bart Start was the toughest football player who ever lived. Jerry Kramer may have been invisible on that day, Dec. 31, 1967, but he sure was invaluable.

The photo here shows Starr, #15, lying face down in the end zone, while Kramer, #64, is lying almost face down before him.