Home of the Soul: The Whitney Brothers Quartet 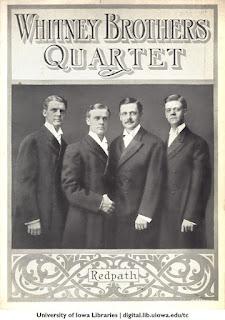 Home of the Soul is a gospel song recorded by the Whitney Brothers Quartet from September 7 to September 9, 1909 at the Victor studio in Camden, New Jersey and released on Victor (16372).

Between October 1908 and September 1909, the Whitney Brothers Quartet recorded 25 songs for Victor: cSmiling Morn, The Cheerful Wanderer, Sally In Our Alley, Excelior and The Little Red Drum, How Can I Leave Thee?, Santa Lucia, Forsaken, Love's Old Sweet Song, The Hunter's Song, The Bluebells of Scotland, Jesus Savior Pilot Me, Dixie, Old Folks At Home, Galilee, Eternity, Home Of The Soul, Jesus Is Calling, Light Of Life, Nearer My God To Thee, The Light Of The World, Remember Me, O Mighty One, The Bugle Song, Grace Be Unto You and Kitty McGee.

One critic wrote, "It is rare to find in one family of four gifted brothers possessing the same gift and even rarer to find four brothers with voices so attuned that they could assume the several parts in a quartet. Rarest of all is to find four whose esprit de corps, close sympathy and magnificent team work enable them to give a program of such beauty, harmony, balance and high appeal. The Whitney's compel laughter or tears and delighted the ear, warm the heart, in an evening that is unique and artistic. Simply put, the Whitney's are irrestible and sure to please."

The Whitney's stopped touring at the end of 1908.