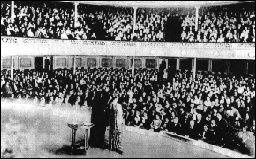 1,500 music-lovers cannot tell the difference between living voice and its re-creation by the New Edison (Phonograph).

Mr. Edison's tone-test was given on the evening of January 26, 1920 at Trinity Auditorium in Los Angeles. Marie Morrisey, a distinguished contralto, sang several selections in direct comparison with the New Edison's re-creation of her voice. Only by watching her lips could the audience tell when she was singing and when the New Edison was (playing a re-creation of her voice.)

Then came the 'dark scene' test in which the audience had to depend on ear alone. While Miss Morrisey was singing the lights went out. Densest black swallowed the stage, singer and phonograph.

Morrisey's rich contralto continued to fill the auditorium. Then the lights flashed on again. The audience gasped - rubbed its eyes.

Morrisey had left the stage. Only the phonograph was standing there. While the lights were out, the New Edison had taken up her song and no one in the audience had detected the substitution.

The Los Angeles newspapers of the following day, January 27th, said in part as follows:

"The object of the tone-test - to prove the fidelity of the New Edison in recreating the human voice - was a success." - Los Angeles Times

The Los Angeles tone-test is not an isolated example. Approximately 4,000 similar tests have been given before 3,500,000 people in the United States and Canada. Representative newspapers have reported that these 4,000 tests were unqualified successes for the New Edison.